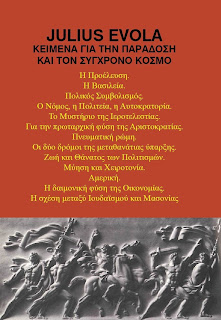 As Greece's economic and political crises worsen, a previously marginal neo-Nazi group, Golden Dawn, is becoming ever more prominent, and is currently expected to win some seats in the Greek parliament in the forthcoming general election. And the first book on the "books" section of the Golden Dawn's website is their Greek translation of Julius Evola, Essays on Tradition and the Modern World (shown right).

The label "neo-Nazi" is often used in polemic rather than analytic fashion, but in the case of the Golden Dawn its use is justified. The Golden Dawn's party emblem (shown below, left) resembles the swastika, party members use the fascist salute, and Joseph Goebbels is also to be found in the books section of their website, along with many of the works of Nikolaos Michaloliakos, the Golden Dawn's leader and a member of the Athens City Council since the municipal elections of November 2010, in which the Golden Dawn received 5% of the vote, a significant increase on the 0.29% they received in the 2009 general election.

It may be assumed that what is proving most attractive to some Greeks in the Golden Dawn's platform is its forthright objections to Greece's subjugation by EU memorandum, as a result of the intersection of the  activities of irresponsible and corrupt Greek politicians with the global financial markets. One does not have to be a neo-Nazi to see some truth in that analysis. Added to this is the firm anti-immigrant position that is common to neo-nationalist parties across Europe, and has proved popular from France to Denmark. A third element is nationalistic, standing against America and Greece's familiar local enemies, Turkey and those who attach the name "Macedonia" to what is now officially called the "Former Yugoslav Republic of Macedonia."

These are the positions that emerge most clearly from a review of the Golden Dawn's website. However, the influence of Evola can also be found, though not so prominently. He is, as has been said, on the book list. Condemnation of modernity and of "the modern world" appears in the archive of "ideological texts," and the penultimate (11th) point to which members commit themselves is to "honor and respect Tradition." They also accept that "nationalism is the only absolute and real revolution because it seeks the birth of new ethical, spiritual, social and psychic values." We learn that the Golden Dawn's Youth Movement "is not a simple political formation, and requires of members a particular way of life based on honor, morality and virtue."

Evola, then, seems to be of importance to the Golden Dawn, if not to the platform that may be about to bring it into the Greek parliament. And Evola is also read elsewhere in Greece: although Essays on Tradition and the Modern World is the only book of Evola published by the Golden Dawn, Greek translations have been published elsewhere of The Aryan Doctrine of Battle and Victory (1985), The Metaphysics of Sex (2006), Revolt against the Modern World (2009), The Doctrine of Awakening (2010), and Orientamenti (2011).

My thanks to the Russian blogger Evolist for bringing this to my attention.

Email ThisBlogThis!Share to TwitterShare to FacebookShare to Pinterest
Other posts on: Evola, Greece

"Nazi" is a pejorative.

As with most similar organizations Evola is only important to the extent that his writings can be used to promote the underdeveloped ideology of the party. Most of them probably wont ever dwell further in his ideas or try to look at them from a historical perspective (or even metaphysical).
The fact that there was in Greece over 20 years ago an editor that has published about 15-20 books of traditionalist writers (Coomaraswamy, Guenon, Schuon etc but not Evola) without the likes of them even knowing about those authors proves exactly that Evola like other thinkers are just used by those parties for readily available quotes to fill their ideological gap.

Obviously Evola, as a universalist, does not speak directly to the party's nationalist base, but helps Michaloliakos direct his own energies.

Mr. Panopoulos has done a great job of expressing my sentiments exactly.

Sadly, the vast majority of the far right today is nothing more than hooliganism.

By Renee Maltezou and Harry Papachristou

ATHENS (Reuters) - Greek police arrested the leader and more than a dozen senior members and lawmakers from the far-right Golden Dawn party on Saturday after the killing of an anti-fascist rapper by a party supporter triggered outrage and protests across the country.

Party leader Nikolaos Mihaloliakos, spokesman Ilias Kasidiaris, three other lawmakers and more than 10 members of the party were arrested on charges of founding and participating in a criminal organization.

(deleted for brevity)
In the most significant crackdown on a political party in Greece since the fall of a military dictatorship in 1974, the arrests are the biggest setback to Golden Dawn since it entered parliament on an anti-immigrant agenda last year.

Ranked as Greece's third most popular party, it is under investigation for the murder of Pavlos Fissas, who bled to death after being stabbed twice by a party sympathizer.

The detainees were taken under high security to the prosecutors' office. They are expected to be charged officially on evidence linking the party with a string of attacks, including the stabbing of the rapper on September 17 and the killing of an immigrant last year, court officials told Reuters.

The party has denied any links to the killing and Mihaloliakos has warned Golden Dawn could pull its lawmakers from parliament if the crackdown does not stop.

Police also confiscated two guns and a hunting rifle from Mihaloliakos' home, saying he did not have a license for them.

Two police officials were also arrested on Saturday for breach of duty in relation to the case.

About 200 protesters unfurled a banner reading "Golden Dawn" outside the party's headquarters in Athens.

"Golden Dawn is here; It will not back down. You cannot jail ideas," Golden Dawn MP Artemis Mattheopoulos, who is not among those detained, told reporters.

Prime Minister Antonis Samaras's government has so far resisted calls to ban the party, fearing it could make it even more popular at a time of growing anger at repeated rounds of austerity measures and instead, it has tried to undermine the party by ordering probes that could deprive it of state funding.

Samaras ruled out snap elections after the arrests.

Finance Minister Yannis Stournaras said Greece did not face the risk of political instability and Justice Minister Haralambos Athanassiou said all Golden Dawn members who had been arrested would receive a fair trial.

The arrests surprised Greeks wary of political theatre in a country where little has been done to rein in a party that is widely viewed as neo-Nazi.

"It's good that they arrested them, but I'm afraid that we will start killing each other now," said Dimitra Vassilopoulou, a 58-year old housewife.

"Does the government actually mean it or is it just a tactic to impress us? Why didn't they do anything when the immigrants were killed? How come they just discovered that Golden Dawn is a criminal organization?"
(deleted for brevity)

The party, whose emblem resembles a swastika, rose from obscurity to enter parliament last year after promising to mine Greece's borders to prevent illegal immigrants from entering. Its members have been seen giving Nazi-style salutes but the party rejects the neo-Nazi label.

Human rights' groups have accused the party of being linked to attacks on immigrants but this is the first time it is being is investigated for evidence linking it to an attack.

(I disapprove of fascism. But have added these links to offer information about the social context in which GD gained strength)

Link to a video of an elderly man in Greece saying why he approved of Golden Dawn. "They help me".

It would be a blow to a Greek male's self respect (philotimo) to have to accept charity, so it indicates how tactfully GD behaved and how desperate the social service breakdown in Greece must be.

References are made to GD food distributions.

Sep 20, 2013 - Late on the night of September 20th, the greek police HQ issued a statement banning the food distribution that had been planned by Golden ...

Jul 25, 2013 - Food distributed to the tune of the Horst Wessel Song Greek version of the ... of food and clothing Golden Dawn played a Nazi anthem during a ...


Greece's people show the politicians how to fight Golden Dawn ...

May 6, 2013 - Jump to comments (…) Golden Dawn distribute food in Athens. Golden Dawn members carry out a Greeks-only food distribution outside their ...