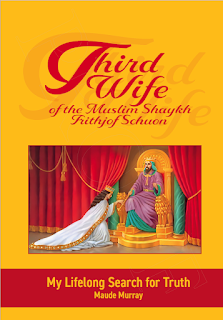 The autobiography of a former leading Maryami, Maude Murray, was published in 2021 by Beacon Books, an Islamic publisher in Oldham, England, as Third Wife of the Muslim Shaykh Frithjof Schuon: My Lifelong Search for Truth. Following threats of legal action, and possibly some actual litigation, it was withdrawn and has not been reissued, though a pdf of the proof is currently available on Google Drive here.

The book is extremely critical of Murray's former husband Frithjof Schuon, following the same line taken by Murray in her YouTube video (here) and on her website (here). It consists of 31 relatively short chapters that cover four phases in Murray’s life: (1) youth and encounter with Traditionalism (chapters 1 to 5); (2) the extended Schuon family in Lausanne (chapters 6 to 9); (3) the Bloomington community (chapters 10 to 19); and (4) Murray’s subsequent life, including reflections on earlier events (chapters 20 to 31). Murray becomes Schuon’s third wife during phase 2, and the relationship ends during phase 3.

The book is a valuable primary source for the history of the Maryamiyya, but not always an easy one. The chapters covering the first two phases are quite well written, in a pleasant, rather chatty style with occasional repetitions and digressions. Murray, it seems, was generally happy during these phases of her life, and reports them happily enough. The picture they paint is believable, and is not contradicted by anything we know from any other source. Phase 3 begins much as phase 2 ends, but the narrative then becomes increasingly hard to follow, as Murray becomes more unhappy and troubled. This is understandable—she was not having an easy time at all towards the end of the Bloomington period—but somewhat reduces the empirical value of the account.