An interesting new article on Eliade and Traditionalism: Timotheus Lutz, "Mircea Eliade's 'Traditionalism': Appearance and Reality," Hyperion 2015. The article quotes several comments on Traditionalism and Traditionalists (Guénon and Coomaraswamy) by Eliade of which I was not previously aware. I am not sure I agree with the article's conclusions, but the research on which it is based is certainly valuable. Thanks to CG for drawing my attention to this article.
No comments:

Email ThisBlogThis!Share to TwitterShare to FacebookShare to Pinterest
Other posts on: Eliade, new articles 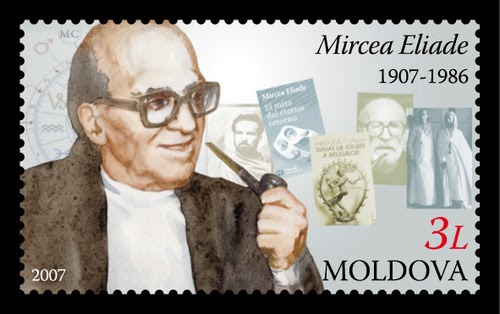 Only just found: the world's only known Traditionalist postage stamp.

Inset in the Eliade stamp, shown here, are two well-known photographs of Eliade, the covers of two of his better known books (The Myth of the Eternal Return and the History of Religious Ideas), and--less predictably--a photograph of Guénon and Schuon in Cairo.

The stamp was designed by Elena Karacenţev (b. 1960), a Moldovan artist who grew up in what was then Leningrad, and so perhaps discovered Eliade in a Russian version.
No comments: