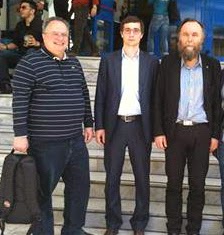 Questions are being raised (for example, in the FT) about relations between Alexander Dugin (right in photo) and the new Greek foreign minister, Nikos Kotzias, (left in photo). Kotzias, a Communist in his student days and then a successful professor of international studies before his appointment as foreign minister, hosted Dugin at the University of Piraeus in 2013. The transcript of this event tells us little of the views of Kotzias, who chaired the session and said little, other than to compare the European Union to an empire. That Kotzias is hostile to the European Union and its recent policies regarding Greece should come as no surprise: that is after all the whole point of the elections that have just brought Kotzias and colleagues to power.

There are signs of Kotzias and colleagues inclining towards Russia, including Prime Minister Alexis Tsipras choosing the Russian ambassador as the first foreign official he met after his appointment, and the stance he is adopting against EU sanctions against Russia. There are, however, no obvious signs of them tending specifically towards Dugin's version of Eurasianism, and The Economist is probably right to conclude that "there is no basis for religious determinism in diplomatic history... [but] when the diplomatic stars are aligned, common cultural and spiritual reference points can give added resonance to a relationship."
No comments:

Email ThisBlogThis!Share to TwitterShare to FacebookShare to Pinterest
Other posts on: Greece, New Right, Russia

The Kali yuga in context

As readers of Guénon well know, the concept of the kali yuga or dark age is central to his thought, and thus to Traditionalism as a whole. An excellent new article on the Hindu origins and European uses of the concept places its development in a wider context. The article is Luis González-Reimann, "The Yugas: Their Importance in India and their Use by Western Intellectuals and Esoteric and New Age Writers," Religion Compass 8 (2014), pp. 357–370.

González-Reimann argues that the concept of the kali yuga is a late one, emerging in India only around the first century AD, when it helped to explain the various disasters then afflicting the classical Vedic system. It became known in Europe during the seventeenth century, but did not attract much attention until the eighteenth century, when Voltaire was among those interested in it, and in the challenge that the system of the yugas presented to established Christian chronology. The intellectual mainstream soon lost interest, however, according to González-Reimann because of the impact of a refutation by Sir William Jones. In fact, I suspect, it was also because chronologies based on geology were then beginning to render all other varieties of chronology obsolete.

Even if the intellectual mainstream lost interest in the yugas, esotericists did not. The yugas featured in the work of Antoine Fabre d'Olivet (1767-1825), who suggested that the Hindus had got them the wrong way round and that the kali yuga was actually the best of the four yugas. They then appear in the work of Alexandre Saint-Yves d'Alveydre (1842–1909), who agreed with Fabre d'Olivet that the yugas were actually improving. Helena Blavatsky, Annie Besant and Rudolf Steiner all wrote about the yugas, following Saint-Yves d'Alveydre's optimistic view. Besant emphasized the coming new age of the satya yuga, and Steiner even held that the kali yuga ended in 1899.

Saint-Yves d'Alveydre modified the standard Indian understanding of the yugas, equating the mahāyuga with the manvantara, two measures of time that classically belonged to different systems, and were far from identical. Guénon follows Saint-Yves d'Alveydre in this, which indicates his proximate source. Guénon differed from the esoteric norm, however, and most importantly, in  reverting to the original emphasis on the negative nature of the kali yuga itself. And the rest, as they say, is history. Once again, we see how Traditionalism owes much to mainstream esotericism, but also differs from it.

All this is shown clearly by González-Reimann in his article, which closes by observing that "in the second half of the 20th century, esotericism largely morphed into New Age thinking, or ... the New Age engulfed esotericism. Either way, such ideas [as the yugas] ... have been incorporated into the manifold spectrum of New Age thought." Yes, perhaps, so far as optimistic understandings from Fabre d'Olivet and Saint-Yves d'Alveydre to Besant and Steiner are concerned, but no so far as the Traditionalist understanding is concerned.
4 comments: