Thomas F. Bertonneau, whose blog at the conservative Brussels Journal was mentioned in an earlier post, also has a very active stand-alone blog, The Orthosphere, started in 2012. The blog is mostly Christian and political, and advertises the possibility of setting up or joining "local traditionalist groupuscles." The two groupuscles that are linked are both Australian, and paleoconservative more than Traditionalist, though one--in Sydney--does have an interest in Evola. Bertonneau's interest in Guénon is such that his blog own can be called "soft" Traditionalism.

Thanks to N. R. for drawing my attention to The Orthosophere.
No comments:

Email ThisBlogThis!Share to TwitterShare to FacebookShare to Pinterest
Other posts on: America (North), blogging, Christianity

New translations of Dugin, and other reading 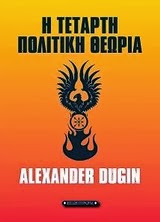 Alexander Dugin's Fourth Political Theory has just (2013) been translated into Greek, published by Esoptron (Έσοπτρον), a mainstream Greek publisher. English and German translations have also been published recently (2012) by Arktos, the current incarnation of the publisher previously noted in this blog (post here) under its former name, Integral Tradition Publishing.

All these books are available on Amazon, which makes it possible to see what other authors some of Dugin's readers are buying. Unsurprisingly, one finds Julius Evola, Alain de Benoist, and Guillaume Faye. There is also a new addition, Markus Willinger, whose Generation Identity: A Declaration of War against the 68ers is also published by Arktos. Willinger is a young (born 1992) Austrian, a reader of Evola and de Benoist and Faye, whose book contains forty short chapters on topics such as identity, loneliness, religion, ecology, death, sexuality, ethnopluralism, and the Zeitgeist. Chapter 41 is his "declaration of war." Another book that Dugin's Amazon US readers are buying is Jack Donovan's exploration of masculinity, The Way of Men. But then a lot of people are buying Donovan at present.
1 comment:

Email ThisBlogThis!Share to TwitterShare to FacebookShare to Pinterest
Other posts on: Greece, new books, Russia

To avoid Dugin, go to Mars!

An unusual argument was made in yesterday's USA Today: to avoid Alexander Dugin, humanity should go to Mars. Robert Zubrin, president of the Mars Society, starts an opinion piece in which he argues for a joint Russian-American Mars exploration program by referring to Edward Snowden, Syria, and Dugin as indices of deteriorating Russian-American relations. Instead of quarrelling, Zubrin argues, Russia and America should combine forces in a "grand project." I wonder how Zubrin became aware of Dugin.
1 comment: