Dragoš Kalajić and Traditionalism in Yugoslavia 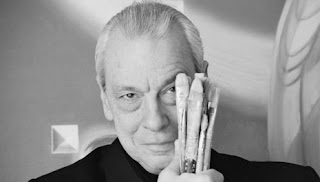 Kalajić was a painter who trained in Rome, where he met Evola, though details of this are unclear. Evola was not visible in Kalajić’s 1968 book Krševina (Wreckage), but is very visible in his Uporište: rehabilitacija structure integralnog čoveka (The Stronghold: A Rehabilitation of Integral Man’s Structure) and in all his subsequent work, including his articles in the major newspaper Politika, his columns in the magazine Duga, and his editorial work for the publishing house Prosveta. Two notable later books by Kalajić are Mapa (Anti)utopija (A Map of (Anti) Utopias, 1978) and Smak sveta (Doomsday,1979), which is a collection of his magazine articles. Although Evola was Kalajić's main source, René Guénon was also introduced to the Yugoslav public.

Jakovljević suggests that Kalajić got away with publishing ideas that were not exactly compatible with Yugoslavia’s ruling communism because the Yugoslav authorities were at that time more worried about the New Left than the New Right. As Serbian nationalism began to replace communism, his ideas became ever more popular in certain circles.

Since Jakovljević understands Kalajić as a neo-fascist, his article also covers the critique of Nazism and totalitarianism made by Radomir Konstantinović (1928-2011) in Filosofija palanke (The Philosophy of Parochialism, 1969).

Jakovljević clearly shows the importance of Traditionalism for Kalajić. It is less clear what Kalajić’s distinctive contribution to Traditionalist thought was. This may be covered in a later article. The article stops in 1989, and we can only hope for a subsequent article covering the remainder of Kalajić’s career and activities.
(This post has been updated at the suggestion of Branislav Jakovljević to clarify the nature of the critique made by Konstantinović).