The Financial Times reports a new movie (which its correspondent did not much like) about the Brazilian philosopher and ex-Maryami Olavo de Carvalho. This previewed last week at the Trump International Hotel in Washington DC at an event co-hosted by Steve Bannon and attended by Eduardo Bolsonaro, the son of President Jair Bolsonaro of Brazil.

President Bolsonaro himself did not attend the movie screening, but when he held a dinner for conservatives at the Brazilian embassy during his visit to the US, he placed Carvalho on his right and Bannon on his left. Brazilian Foreign minister Ernesto Araújo sat on the other side of Carvalho.
1 comment: 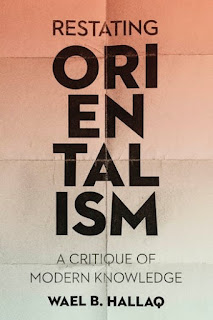 A remarkable new book, Wael Hallaq’s Restating Orientalism: A Critique of Modern Knowledge (New York: Columbia University Press, 2018), draws heavily on the work of René Guénon. Hallaq is a distinguished Palestinian-American scholar and intellectual, and his use of Guénon represents a Traditionalist breakthrough into the Western intellectual mainstream. 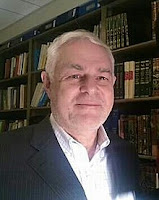 Hallaq is the Avalon Foundation Professor in the Humanities at Columbia University in New York. He was born in Nazareth, did his PhD at the University of Washington, and embarked on a distinguished career as a scholar of Islamic law, initially becoming famous for a 1984 article, “Was the gate of ijtihad closed?”
Since then he has written a number of books, most notably A history of Islamic legal theories: An introduction to Sunni usul al-fiqh (Cambridge University Press, 1999) and The origins and evolution of Islamic law (Cambridge University Press, 2005). Recently, he has turned towards more contemporary issues. His The impossible state: Islam, politics, and modernity's moral predicament (Columbia University Press, 2013) argued that an “Islamic state” is an impossibility, and was widely read, also in the Muslim world, in English and in Arabic and Urdu translations. Restating Orientalism moves even further from classic scholarly topics towards contemporary issues.

Restating Orientalism is, as has been said, in part revisiting Said’s Orientalism. As Orientalism has been revisited before by many authors, this is not in itself very remarkable. What is remarkable is that Hallaq challenges Said on two points. One is a point that has been made before, that not all Orientalists were as Said paints them. Another point is a more far-reaching one. Said, according to Hallaq, failed fully to understand the phenomenon he was discussing. He placed Orientalist scholarship and literature within the framework of European imperialism, but he did not then put European imperialism within any suitable explanatory framework. The appropriate explanatory framework, argues Hallaq, is modernity. His prime example of an Orientalist who was not as Said paints Orientalists is René Guénon, and Guénon is also an important source for the understanding of modernity that Said missed out.

Hallaq discusses and explains Guénon’s thought at length. He also does something that has never really been done before: he introduces Guénon into the intellectual mainstream. At one point, for example, he gives us Guénon’s views on the Is/Ought distinction, referring also to Charles Taylor and Alasdair MacIntyre. The Is/Ought problem is a philosophical classic, raised by David Hume (1711-1776) and most recently addressed by MacIntyre. Guénon did not, of course, address the Is/Ought problem directly, so Hallaq has to interpret Guénon somewhat to bring his thought to bear, but he does this—successfully and repeatedly.

In order to bring Guénon into the intellectual mainstream, Hallaq not only has to interpret him in this way, but also to address another problem that has so long kept Guénon out of the mainstream—or, at least, out of mainstream texts and footnotes, since many people have been reading Guénon without citing him. “That his ideas are esoteric in the extreme and at time outright objectionable,” writes Hallaq, “is of no relevance here.” “Translated into the idiom of the twenty-first century, and transcending its eccentric and unconventional style of expression, Guénon’s critique synoptically captures much of the best in recent social theory, Critical Theory, and cultural criticism.” So: yes, in current scholarly terms Guénon may be eccentric and unconventional, esoteric and even objectionable, but let us not bother with that, let us see what he actually gives us.

Restating Orientalism does much more than simply restate Guénon’s Traditionalism, of course. It develops a new critique of modernity, and as well as drawing heavily on Guénon’s work, also draws on a range of other thinkers—Michel Foucault, Carl Schmitt, Antonio Gramsci, and Hannah Arendt, to name a few.

It will be very interesting to see how Restating Orientalism is received.

My thanks to Andrew Booso for drawing my attention to this book.
No comments:

Peter Östlund, a Swedish film-maker, has put together a pilot for a film about Ivan Aguéli, the Swedish painter who introduced René Guénon to Sufism. The pilot, which can be watched here, consists largely of readings from Aguéli's correspondence, mostly in Swedish, which will limit the film's international appeal. The pilot lasts 11 minutes, and has quite appealing photography and music. The opening scene is in Spain at the end of Aguéli's life, from where the film moves to the young Aguéli paining on the Swedish island of Gotland.

The Swedish title, "Frände av Ljus," may be translated "Kin of Light." The text on the home page reads: "The film revolves around the dramatic life of Ivan Aguéli, his versatility, genius and experimental painting. We want to show Aguéli as the multifaceted man he was, with strengths and weaknesses. A seeker, both after real life and higher things. The continuation of the project now depends on funding. In that process we are also seekers..."

My thanks to Anthony Fiscella for drawing the film to my attention.
1 comment:

Email ThisBlogThis!Share to TwitterShare to FacebookShare to Pinterest
Other posts on: Aguéli, film, Scandinavia

The on-line archives of Louis Charbonneau-Lassay

The archives of Louis Charbonneau-Lassay (discussed in an earlier post) are now available on-line at an excellent and user-friendly site (if you know French). There are special sections for the correspondence between Charbonneau-Lassay and René Guénon, and for the Estoile Internelle, the Christian initiatic organisation that at one point interested the early Traditionalists. A very useful resource for researchers.
1 comment:

Email ThisBlogThis!Share to TwitterShare to FacebookShare to Pinterest
Other posts on: Christianity, France, text archives

Discussions covered Guénon’s life, work and influence, mostly at a fairly introductory level, to the disappointment of Guénonian commentators on YouTube, where the program is also available, who felt that a serious presentation of doctrine would have been more interesting, and criticized the biographical approach. The program was definitely accessible to non-experts, however, which I assume was the intention.

Many of the most interesting comments were made by Accart, author of Guénon ou le renversement des clartés. Influence d'un métaphysicien sur la vie littéraire et intellectuelle française (1920-1970) (Guénon or the overthrow of enlightened knowledge: The influence of a metaphysician on French literary and intellectual life 1920-1970; 2006). This excellent book studies the impact of Guénon on the French artistic and intellectual circles in great detail, and it is unfortunate that it is not available in English.

Towards the end of the program, when de Benoist asked about Guénon’s influence today, Laurant also made some interesting points about Freemasonry. Guénon, he felt, had been the central reference of French Freemasonry when it came to symbolism earlier in the twenty-first century, but this influence had faded, as it had inevitably come up against the “liberal” strains in Freemasonry that, being opposed to religion in general, were also opposed to the Guénonian approach. I have never seen these developments discussed in writing, and if anyone should know about them, it is Laurant.

The even tone of the program was interrupted only when de Benoist, who knows his Guénon almost as well as the experts, said that after moving to Cairo “Guénon converted to Islam.” Laurant, Accart and Bisson all objected. Accart pointed out that Guénon had received his Sufi “initiation” many years earlier, and had also said that “conversion” was impossible for anyone who truly understood the unity of the tradition. Laurant went further, asserting that for Guénon it was possible to be Sufi without being Muslim, and suggesting that it was only “the Islam of today” that had a problem with this. I think both Accart and Laurant were partly right, but only partly. Accart was right that Guénon did not consider himself to have converted, and Laurant was right that the Guénon who received a Sufi “initiation” in about 1911 considered Sufism to be separable from Islam. There are reports that Guénon followed the practices of Islam in Cairo, however, and no reports suggesting that he did so in Paris. So even if de Benoist was perhaps wrong to use the word “converted,” he was right that something very close to what most people would call a conversion did happen after Guénon moved to Cairo.

All in all, a good program, at least at the level that it chose to address.

My thanks to Steven Engler for drawing my attention to it.
6 comments: