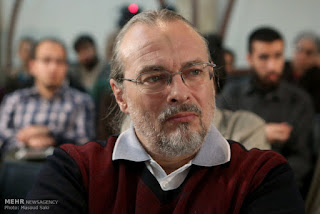 Bonnaud encountered the works of Guénon as a young man, and became Muslim in 1979. He studied with the great Malian ethnographer and Tijani Amadou Hampâté Bâ. In 1991, he published Le soufisme : « al-taṣawwuf » et la spiritualité islamique (Sufism: "al-taṣawwuf" and Islamic spirituality) with a preface by the French Traditionalist scholar of Ibn Arabi Michel Chodkiewicz.

While working on a PhD at the École pratique des hautes études in Paris with Henri Corbin, he studied with Sayyed Jalal-ed-Din Ashtiani, an Iranian philosopher who had himself studied under the Ayatollah Khomeini (and who also taught William Chittick). Bonnaud became Shi'i himself. His PhD dissertation was later published as L'Imam Khomeyni, un gnostique méconnu du xxe siècle : métaphysique et théologie dans les œuvres philosophiques et spirituelles de l'Imam Khomeyni (Imam Khomeini, an unrecognised gnostic of the twentieth century: metaphysics and theology in the philosophical and spiritual works of Imam Khomeini).

Bonnaud moved to Iran, where he lived in the city of Mashhad, working on a very scholarly translation of the Quran into French, referring to all the leading classical Shi'i authorities, and using copious notes to summarise his researches and thus the meanings that he had decided to translate. The note explaining the bismillah at the start of the fatiha was nine pages long. He also traveled abroad as an exponent of Shi'ism, and it was on such a mission that he lost his life.

Email ThisBlogThis!Share to TwitterShare to FacebookShare to Pinterest
Other posts on: Africa, deaths, France, Iran, Sufism

Email ThisBlogThis!Share to TwitterShare to FacebookShare to Pinterest
Other posts on: America (North), Christianity, deaths, Maryamiyya

Call for Papers for conference on Islam and esotericism in Belgium

Call for Papers: “Islamic Esotericism in Global Contexts,” 2020 Meeting of the European Network for the Study of Islam and Esotericism (ENSIE)

The European Network for the Study of Islam and Esotericism (ENSIE) invites you to submit proposals for its 2020 meeting. The theme for the meeting is “Islamic Esotericism in Global Contexts”. The aim is to consider the relationship between Islam and esotericism, and Islamic esotericism, in a global context, shifting the emphasis not only from Western perspectives, but also being more inclusive of the experience of Islam beyond the Arabo-Persian domains. We encourage proposals that give prominence to the agency of non-Western actors in negotiating and challenging social, political, and doctrinal “realities” as they manifest in the writings and activities of esoteric groups and systems. The chronological scope thus stretches from medieval to contemporary times. We encourage papers outlining suitable methods of investigation, re-evaluating accepted conceptual frameworks, formulating effective comparative research, and foraying into new textual frontiers.

We invite papers that engage with these aims, but proposals that do not relate to the 2020 meeting theme are also welcome.

There is no fee for attending the meeting and accommodation will be provided, but the cost of travel is the responsibility of individual participants.

Further information at http://ensie.site/conferences.html.
No comments:

Email ThisBlogThis!Share to TwitterShare to FacebookShare to Pinterest
Other posts on: Conferences and lectures
Newer Posts Older Posts Home
Subscribe to: Posts (Atom)