Ernesto Araújo, probable Traditionalist sympathizer (see earlier post here), resigned as Brazilian foreign minister on March 29, 2021.
The resignation came as part of a major cabinet reshuffle and in response to growing criticism of Araújo's record, notably in connection with relations with China (and former President Trump) and thus with obtaining supplies of Covid vaccine.
1 comment:

Email ThisBlogThis!Share to TwitterShare to FacebookShare to Pinterest
Other posts on: America (South), New Right

A new book, Ivan Aguéli: The Pearl upon the Crown by Oliver Fotros (which seems to be a pseudonym) argues that Ivan Aguéli's influence on René Guénon was far greater than is commonly realized, giving detailed comparisons from both men's writings, and asking why this influence has not been noticed before. The book, which is 110 pages long and self-published, is available from Amazon.

I think Fotros is probably more or less right, and I actually make a similar argument in my chapter on "The significance of Ivan Aguéli for the Traditionalist movement" in the forthcoming (in April) collective work on Aguéli, Anarchist, Artist, Sufi: The Politics, Painting, and Esotericism of Ivan Aguéli (Bloomsbury).

Email ThisBlogThis!Share to TwitterShare to FacebookShare to Pinterest
Other posts on: Aguéli, Guénon, new books

New book on Schuon's thought, including his views on Islam 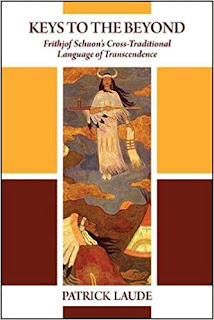 Patrick Laude has just published a guide to Schuon's thought, Keys to the Beyond: Frithjof Schuon's Cross-Traditional Language of Transcendence (Albany: SUNY Press, 2020; $34.95). Laude, who is himself a Traditionalist, knows Schuon's thought well, and does a good job of explaining and synthesising it, though those without preparation may still find the book hard.

The book's first section has four chapters, starting with a chapter on "Ātman, Māyā and the Relatively Absolute," which explains Schuon's basic metaphysical framework. Then comes "The Avatāric Mystery," Schuon's understanding of "descent" in various contexts. "Upāya: Religion as Relatively Absolute" covers Schuon's understanding of religion as such, and "The Nature of Things and the Human Margin" covers esotericism.

The following section consists of two chapters, "Trinitarian Metaphysics" and "Necessary Sufism and the Archetype of Islam." These deal with Schuon's understandings of Christianity and Islam.

Then come three chapters on three special topics: "The Divine Feminine." "The Yin-Yang Perspective and Visual Metaphysics," and "The 'Tantric' Spiritualization of Sexuality."

Finally, a chapter on "Esoteric Ecumenism" indicates the place of Schuon within current academic approaches to religious pluralism.

One of the most interesting chapters is that dealing with the difficult topic of Schuon's relationship with Islam. Laude's argument is that it is wrong to understand Schuon's thought in Sufi or Islamic terms, even if this is how Seyyed Hossein Nasr tends to see it. "The fact that Schuon himself led most of his adult life within the ritual forms of a particular tradition [Islam] does not in the least invalidate” the fact that on an esoteric and metaphysical level he was supra-confessional (p. 191). He emphasised that esotericism is independent of the various traditional forms (religions), and often critiqued "the intrinsic limitations of the perspectival and theological forms of Abrahamic religions" (193), including Islam.

Email ThisBlogThis!Share to TwitterShare to FacebookShare to Pinterest
Other posts on: Christianity, Maryamiyya, new books

New article on Traditionalism and the Far Right in Argentina

According to the abstract,

The Traditionalism of the French esoteric philosopher René Guénon and the Italian esoteric philosopher Julius Evola is important for the Far Right. Guénon’s Traditionalism is primarily religious, but has significant political implications, while Evola’s Traditionalism is primarily political, though retaining its religious grounding. It has been important for the Far Right in Europe, Russia, and North America. As this article shows, Traditionalism has also been important in Argentina, but in ways that differ from patterns observed elsewhere. This article distinguishes three phases in the Argentinian reception of Traditionalism, starting in the 1920s. Guénon was first received in the Argentinian ‘integralist’ Catholic milieu along with other anti-modernists like Jacques Maritain and Nikolai Berdyaev, and then at the Seminary of Paraná in the aftermath of the Tacuara movement. This is remarkable, as elsewhere it is Evola who has a political impact, not Guénon, and Guénon, who dismissed the Catholic Church, is generally ignored by Catholics. During a third phase, following global trends, Evola replaced Guénon, but in more marginal circles. These three phases show the importance of the interaction between transnational influences and national conditions, in this case the unusual position of the Catholic Church in Argentinian political life.