Eduard Limonov died of cancer on March 17, 2020. Limonov was not himself a Traditionalist, but between 1993 and 1998 he worked with Russia's leading Traditionalist Alexander Dugin (seen here in an early photograph with Limonov, R) in the National Bolshevik Party (NBP). Limonov was also editor of Limonka (Grenade), the NBP newspaper, in which Dugin wrote. 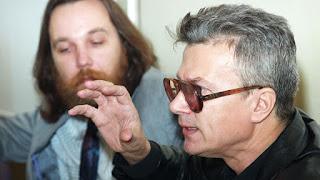 Alexander Chernykh noted in the Russian newspaper Kommersant that an obituary was meant to tell the story of the life of the deceased, but in the case of Limonov, every Russian already knew that life anyhow. For those outside Russia who do not know the story, Limonov was a dissident poet and writer who went into exile from the USSR in New York, a period of his life that formed the basis of his best-known novel, It's me, Eddie (Это я — Эдичка), written in 1976, published in Paris in 1979, and then in Russia in 1991. It's me, Eddie, with its foul language and highly-colored sex scenes, both shocked and entertained the Russian public. It is available in English translation.

After returning to Russia following the collapse of the USSR, Limonov combined writing with political action that was quite as shocking and, for some, quite as entertaining as his writing. He started the NBP with Dugin and the musician Yegor Letov in 1993, and another musician, Sergey Kuryokhin (1954-96), soon also joined the NBP leadership. Dugin, however, broke with Limonov and left the NBP in 1998.

The NBP carried out a number of dramatic provocations, and Limonov was arrested in 2001 under terrorism charges. The terrorism charges were dismissed, but Limonov was still convicted for illegal possession of weapons, and jailed until 2003. On his release, he continued to write and lead the NBP, which was banned as an extremist organization in 2007 and then refounded as Other Russia (Другая Россия), which still exists.

In an interview after Limonov's death, Dugin described him as "a man of his time, of a world that no longer exists," and as an eternal teenager. "He remained true to himself," said Dugin, and "died at the age of 14."

Although it is the NBP that matters for the history of Russian Traditionalism, Limonov will be remembered primarily for his writing.

Email ThisBlogThis!Share to TwitterShare to FacebookShare to Pinterest
Other posts on: deaths, Russia

A new edited book has two chapters on Neo-Traditionalists, one of which also deals with a Traditionalist, Prince Ghazi bin Muhammad in Jordan, and with the reading of Julius Evola by a Neo-Traditionlaist, Abdal Hakim Murad in England. The book as a whole deals with modernity in the Muslim world.


Abstract: The chapter discusses certain exponents of “traditional Islam” who are organized in an informal network spanning both the Arab world and the West and who are referred to as “Neo-traditionalists,” since the chapter argues that their traditionalism is, in fact, modern. The key figures are Muhammad Saʿid Ramadan al-Buti in Syria, ʿAli Gomaa in Egypt, ʿUmar bin Hafiz in Yemen, Prince Ghazi bin Muhammad and Nuh Keller in Jordan, Abdal Hakim Murad in England, and Hamza Yusuf Hanson in the USA. It is argued that Neo-Traditionalism is a product of what Peter Wagner would call a “crisis of modernity,” the reaction against one stage of modernity that gives rise to a new stage of modernity.


Abstract: The aim of this chapter is to discuss how Islamic universities in the West facilitate and condition the formation of modern Muslim subjectivities in minority contexts with emphasis on the institutions as providers of guidelines for good, Muslim minority life. This is done through a case study of Cambridge Muslim College in the UK, its values and aims, as well as through interviews with the founder and dean [Abdal Hakim Murad], faculty members and students and participatory observation. Cambridge Muslim College sees itself as mediator between Islamic traditions and modern Muslims in the West, and as having a responsibility in engaging in the development of both Muslim minorities and the wider society within which it operates.

For those who are interested in modernity, the blurb of the book as a whole is:


With critical reference to Eisenstadt's theory of "multiple modernities," Muslim Subjectivities in Global Modernity discusses the role of religion in the modern world. The case studies all provide examples illustrating the ambition to understand how Islamic traditions have contributed to the construction of practices and expressions of modern Muslim selfhoods. In doing so, they underpin Eisenstadt's argument that religious traditions can play a pivotal role in the construction of historically different interpretations of modernity. At the same time, however, they point to a void in Eisenstadt's approach that does not problematize the multiplicity of forms in which this role of religious traditions plays out historically. Consequently, the authors of the present volume focus on the multiple modernities within Islam, which Eisenstadt's theory hardly takes into account.

A new chapter in a collection on Heidegger in the Islamicate World (Rowman & Littlefield, 2019) discusses the impact of Heidegger and on post-revolutionary Iranian art theory, and on the art theory of Seyyed Hossein Nasr, the Traditionalist successor of Frithjof Schuon in the United States. It is “Heidegger’s Role in the Formation of Art Theory in Contemporary Iran” by Amir Nasri, an Iranian scholar (pp. 55-67).

Nasri’s starting point is the Hawza-i andishe ve hunari islami (School of Islamic Thought and Art), known for short as the Hawza-i hunari (School of Art), the Tehran-based organization that in Nasri's view was “the most important artistic school of the first decade after the revolution.” The Hawza-i hunari’s art theory was, according to Nasri, impacted especially by three pre-revolutionary intellectuals: Ahmad Fardid (1910-94), Seyyed Hossein Nasr (b. 1933), and Daryush Shayegan (1935-2018). All three were in turn impacted by the great French Iranologist, Henry Corbin (1903-78), who was himself a follower of Heidegger.

Fardid, who was a professor of philosophy and Heidegger’s great advocate in Iran, is not now widely known, but it was he, according to Nasri, who was the inventor of the seminal term gharbzadegi (Westoxification or Occidentosis) that was famously popularized by the novelist Jalal Al-e Ahmad. After the revolution, Fardid became an influential theorist in the Islamic Republic; Nasr and Shayegan went into exile, Nasr permanently, but even so were read at the Hawza-i hunari. Nasr, as noted, became a leading Traditionalist; Shayegan moved away from Traditionalism, questioning whether “the tradition” had ever actually existed.

Nasri traces the influence of Heidegger in Corbin’s concept of the “ideal space,” born of Heidegger’s emphasis on the importance of the Origin (Ursprung) in art combined with Suhrawardi’s understanding of the ideal world. For Corbin, the “ideal space” was key to understanding Persian miniature painting. In this he was followed by Nasr and Shayegan, who also cited Heidegger directly while arguing that the art of the East and of the West do not share a common language. Both Nasr and Shayegan thus looked for the revival of Iranian art through the rediscovery of tradition, as did Fardid.

Nasr then combined Corbin's partly Heidegger-derived concept with Guénon's important pair of quality and quantity. The two-dimensional ideal space is, for Nasr, qualitative rather than quantitative: the quantitative leads to naturalism. Nasr's mature argument is not just Traditionalist, then, but also Heideggerian.
No comments:

Email ThisBlogThis!Share to TwitterShare to FacebookShare to Pinterest
Other posts on: art, Iran, new articles

New article on Traditionalism in Sweden

Olav Hammer has just published an excellent article on "Traditionalism in Sweden" in the International Journal for the Study of New Religions 10.1 (2019): 5–24.

After a general introductory discussion of Traditionalism, Hammer looks especially at three Swedish figures: Ivan Aguéli, Kurt Almqvist (1912–2001), and Tage Lindbom (1909–2001). The most interesting of these sections are those dealing with Almqvist and Lindbom, given that Aguéli has been discussed before.

It it not known how Almqvist first encountered Traditionalism, but he traveled to Switzerland to meet Frithjof Schuon in 1941, becoming Muslim and joining the Maryamiyya. After the war he became Sweden's leading Traditionalist, publishing two Swedish translations of selected works by Schuon and Guénon, and several Traditionalist books of his own, starting with Den glömda dimensionen (The Forgotten Dimension, 1959) and ending with Ordet är dig nära: om uppenbarelsen i hjärtat och i religionerna (The Word is Near to You, On Revelation in the Heart and in the Religions, 1994).

Almqvist's most important reader was Lindbom, originally a prominent member of Sweden's dominant political party, the Social Democrats. Lindbom contributed to establishing the postwar Social Democratic model in Sweden, but then became disenchanted, publishing Efter Atlantis (After Atlantis), which questioned socialism in particular and political ideology in general, in 1951. Some years later he read Almqvist's Den glömda dimensionen, contacted its author, and ultimately also joined the Maryamiya, in 1962, the year in which he published Sancho Panzas väderkvarnar (The Windmills of Sancho Panza), a more thorough attack on modern politics. A number of similar works followed, including Mellan himmel och jord (Between Heaven and Earth, 1970) and Agnarna och vetet (The Chaff and the Wheat, 1974), which Hammer discusses in some detail. Hammer sees Lindbom as "a right-wing political writer par excellence," a Sufi (as a Maryami) whose politics were paradoxically closer to Sayyid Qutb than to Sufism, given that--like Qutb--he dismissed human ideologies and turned instead to Divine authority.

Lindbom is interesting not only as a Swedish Traditionalist but also as a rare example of an explicitly political Schuonian Traditionalist.  There are many political Traditionalists, of course, but they generally follow Julius Evola, not Schuon. Followers of Schuon and Guénon may have political views, but they do not normally write about them, given the primacy of the transcendent over the political. Lindbom, however, was well established in political life before he encountered Traditionalism, and first became a Maryami relatively late in life, at the age of 53. This may be why he did not drop his earlier political interests and emphases.
1 comment: