Natella Speranskaya is organizing a major Traditionalist conference in Moscow on 15-16 October 2011, under the title "Actual Problems of Traditionalism." Promised speakers include Claudio Mutti, there will be an art exhibition including the Russian painter Alexey Belyaev-Gintovt, and a conference volume will be published. Planned sessions are:

Other topics or interest are desecularization, eschatology (orthodoxy and heterodoxy), neo-spiritualism, the problem of initiation, and "the Reign of post-Quantity."

Schuonian perennialism has been present in Islamic thought and education in Indonesia since the publication of a translation of Schuon’s Transcendent Unity of Religions in the 1990s, and has since grown through the impact of the works of  Seyyed Hossein Nasr. Perennialist perspectives have been adopted by some Islamic scholars as a philosophical foundation for the legitimization of religious pluralism and of multiculturalism-based education. They have also been criticized as incompatible with Islamic teachings, and as potentially disrupting the unity of Muslims in Indonesia, despite offering a cursory solution to the issue of violence in the name of religion.

"Inclusive Theology"
Schuon's "transcendent unity" is behind the emergence of the so-called "Inclusive Theology" that was proposed by "Cak Nur," Nurcholis Majid (1939-2005), and that has been encouraging the spread of religious pluralism in Indonesia. Cak Nur, who did his Ph.D. at the University of Chicago from 1978 to 1984, has had enormous influence on the development of liberal Islamic thought in Indonesia, and his name was even proposed as a presidential candidate in 2004. His Inclusive Theology asserts that Islam is but one way to approach God, because the way to God is very wide and diverse.(1) Religious discourse can thus be expressed through various forms, for example, in Hinduism as Sanatana Dharma, in Taoism as the Tao, and in Buddhism as Dharma, all of which represent the primordial tradition, or al-din al-hanif in Islam. Al-din al-hanif, in Allah’s sight, is actually the attitude of resignation (islam) which is common to all religious believers, particularly followers of the scriptures, both Jewish and Christian.(2) All religions teach monotheism (tawhid) and the attitude of surrender (islam), and differ in their exoteric aspects (sharia), and not their esoteric aspect or batin.(3)

Sukidi, in his Teologi Inklusif Cak Nur (The Inclusive Theology of Cak Nur, 2001) argued that the perspectives of the perennial philosophy are needed to apply Inclusive Theology universally to all religions and authentic religious traditions. The search for the roots of the epistemological construct of the Inclusive Theology will thus not stop at finding ultimate reality, but can go deeper through the mystical experience of unification with God. Only through this trans-historical perspective, Sukidi maintains, can the adherents of an Inclusive Theology achieve an authentic ecumenism, timeless and perenenial, although this can only be in the esoteric (batin): religious harmony can only be achieved in the "Sky divine," not in "Earth's atmosphere."(4)

The Study of Religion
Religious Studies in Indonesia were changed by the opening of the Comparative Religion Department at Institut Agama Islam Negeri (State Institute of Islamic Studies) in Yogyakarta in 1961 under Professor Abdul Mukti Ali, Minister of Religious Affairs 1973-1978. Mukti Ali approached the development of comparative religion from the perspective of the Western study of religions, particularly those developed by Snouck Hurgronje, his followers, and the Leiden tradition. Since then, the study of religion in Indonesia has used the secular-liberal approaches of the historical sciences, psychology and philosophy.

More recently, the perspective of the perennial philosophy has begun to be employed as an "original approach" to comparative religion that does not parse religions vertically into historical entities such as Hinduism, Buddhism, Judaism, Christianity and Islam. Schuon's approach is claimed as a spiritual trans-historical perspective which is grounded in historical fact, then raised to the level of mystical theological transcendence so that historical fact becomes relative to the spiritual truth which is seen as the core of religion. Such perspectives became increasingly widespread once Seyyed Hossein Nasr's work was introduced into Indonesia, and eventually became quite popular in religious studies.(5)

Multiculturalism-based Education
On the basis that many horizontal conflicts in Indonesia have had religious nuances, multiculturalism-based education has been massively promoted by liberals since the regional autonomy and decentralization of 1999/2000.(6) Schuon's thought has been used to assert, theologically and philosophically, the importance of developing religious studies based on multiculturalism, according to Syamsul Arifin in his inaugural address as professor of sociology of religion in one of the Islamic private universities. Syamsul Arifin argues that the concept of multiculturalism can be used as a framework or epistemology to understand and disseminate the notion of transcendent unity among the various religions. The study of religion based on multiculturalism can, he further argues, erode conflict and violence, and foster a non-violent culture with the values, knowledge, feelings, and willingness to cooperate on the basis of transcendent unity.(7)

Critiques
As well as influencing Islamic thought and education in Indonesia, perennialism has also been heavily criticised by some Islamic scholars. Adian Husaini, former Chairman of the Islamic Da'wah Council of Indonesia (DDII), has argued that perennialism is against Islamic teaching, as the sharia is not just "exoteric" but rather one of the most fundamental aspects of Islam. One of the primary missions of the prophethood of Muhammad (PBUH) was to give guidance on how to worship Allah. To achieve true esotericism, one must perform proper religious procedures in accordance with the teachings of Prophet Muhammad (PBUH). It is Allah that is worshipped and nothing else, neither gods nor otherwise.

Anis Malik Thoha of the Institute for Study of Islamic Thought and Civilization (INSISTS) in Jakarta, who currently teaches at International Islamic University Malaysia (IIUM), has argued that the perennialist conception of esoteric truth is  over-simplistic. Perennialism is an interpretation, not a revelation, and is contrary to religious principles in general, and to Islam in particular. Religious concepts such as Sanatana Dharma and al-din al-hanif have been terribly distorted to fit the ideas of the Traditionalists. Perennialism is therefore more of a problem than a solution to the issue of religious diversity.(8)

Email ThisBlogThis!Share to TwitterShare to FacebookShare to Pinterest
Other posts on: Indonesia, Maryamiyya

Memoirs of a Dervish

Just published: Robert Irwin, Memoirs of a Dervish: Sufis, Mystics and the Sixties ($17.59 from Amazon US and £8.49 from Amazon UK). This is an autobiographical account by a talented writer and novelist of his own journey from 1960s Oxford through the Maryamiyya to Mostaghanem and onwards. Irwin, who is Middle East editor of The Times Literary Supplement, is perhaps best known for his criticisms of Edward Said's Orientalism. Well worth reading, and endorsed by Esther Freud (of Hideous Kinky).
1 comment:

Email ThisBlogThis!Share to TwitterShare to FacebookShare to Pinterest
Other posts on: Arab world, Maryamiyya, new books, traditionalisms (other)

A link between Traditionalism and another form of non-Guénonian "traditional" Islam: Seyyed Hossein Nasr, who admittedly writes quite a lot of prefaces, has written prefaces for two books by US-based Shaykh Muhammad Hisham Kabbani (pictured right), the deputy of Shaykh Muhammad Nazim Adil Al-Haqqani of the Naqshbandiyya Haqqaniyya, one of the best known (and quite possibly the largest) of Sufi tariqas in the contemporary West. 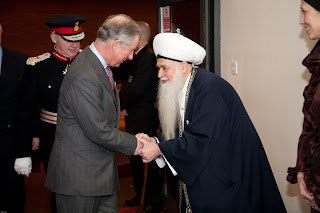 Nasr welcomed Kabbani's Classical Islam and the Naqshbandi Sufi Tradition (1994) as "a precious reminder of the traditional and orthodox understanding of Sufism as represented by one of its major orders," and Kababni's multi-volume Encyclopedia of Islamic Doctrine (1998) as "re-stating traditional and orthodox Islamic teachings without any compromise" and restoring the "universal orthodoxy" that had been "attacked not only from without by the forces of modernism ... but also from within." So Nasr approves of Kabbani, and Kabbani approves of Nasr, and has no major problem with his view of "universal orthodoxy."
Nasr might have had something to do with the introduction of Kabbani to Prince Charles (pictured left, in 2006), but this might simply have been a fruit of the British government's counter-radicalization strategy.

Thanks to Simon Stjernholm, whose PhD dissertation "Lovers of Muhammad: A Study of Naqshbandi-Haqqani Sufis in the Twenty-First Century" was successfully defended at Lund University on June 1, 2011, for noting these connections.
No comments: