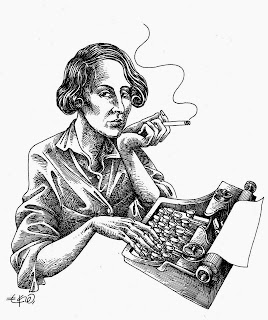 I have just stumbled across the work of María Zambrano, the Spanish philosopher and sometime poet who died in 1991.

Zambrano is interesting because she read and was influenced by Guénon in the 1930s and 1940s, during a period when Traditionalism seems otherwise to have had little impact on the Spanish-speaking world, and because she was herself a leftist--the daughter of a member of Socialist Workers Group, the wife of a diplomat of the Spanish Republic that lost the Civil War to Franco, who returned to Spain precisely because the war seemed lost, who left Spain for exile as Barcelona was about to fall to the Nationalists, not to return until 1984. Finally, she is interesting because she was a woman--there have been female Traditionalists, but all the major figures and writers have been male.

Zambrano is in fact so unusual in Traditionalist terms that a careful examination of her relationship with Guénon's work is required. There seems to be general agreement that she was a perennialist and that Guénon was important to her, and that the mystical is central to her work, but she of course had many other sources, from Plotinus to the Spanish tradition, in which some include Ibn Arabi. Zambrano was also involved with the circles around Eranos. Some of these issues are examined by Adele Ricciotti in "Método y simbología en la razón poética de María Zambrano,"Annales Universitatis Mariae Curie-Skłodowska 36, 1 (2011), pp. 27-39. But more work is needed.

For those who know Spanish,  a beautiful reading of a beautiful passage from Zambrano's Claros del Bosque (1977) is to be found on YouTube.