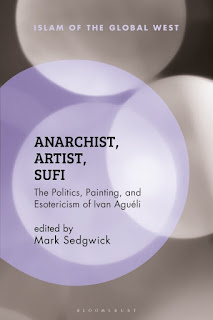 14 chapters by 13 scholars, plus English translations of some of Aguéli's own writings. Sections on art (and anarchism) in Paris, Sufism in Cairo, and Traditionalism--influence on René Guénon. and Traditionalist theories of art.

And as the blurb says, the book shows that "Islam occupied a more central place in modern European intellectual history than is generally realized. [Aguéli's] life reflects several major modern intellectual, political, and cultural trends. This book is an important contribution to understanding how he came to Islam, the values and influences that informed his life, and-ultimately-the role he played in the modern Western reception of Islam."

The table of contents is:

The book is currently available only in hardback at £85 or $137.60 and on Kindle at £51.11 or $82.80, so get your library to order or it or wait for the paperback. And in the meantime you can read the introduction and bits of some other chapters on Google Books here.

A new book from Louis Charbonneau-Lassay

Louis Charbonneau-Lassay (1871-1946), a specialist in Christian symbolism, was a friend of René Guénon, whom he told about the Estoile Internelle, an Christian initiatic organisation that at one point interested the early Traditionalists.
In addition to the Charbonneau-Lassay archives (see earlier post here) we now have a reconstruction of his final great work, Le Vulnéraire du Christ: La mystérieuse emblématique des plaies du corps et du coeur de Jésus-Chris (Gutemberg, 2018), and in English translation, The Vulnerary of Christ: The Mysterious Emblems of the Wounds in the Body and Heart of Jesus Christ (New York: Angelico Press, 2020). A vulnerary is, of course, something used in the cure of wounds.
The Vulnerary has been reconstituted by Gauthier Pierozak, the manager of the invaluable René Guénon archive at www.index-rene-guenon.org.
No comments: