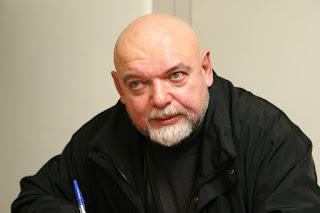 Geydar Dzhemal (Haydar Jamal, Гейдар Джемаль), one of the earliest Russian Traditionalists and one of Russia's best known Muslims, died on December 5, 2016 in Almaty, Kazakhstan.

Dzhemal was born in Moscow in 1947. He studied at the Institute of Oriental Languages at Moscow State University, and was one of the members of the "Iuzkinskii Circle" (Южинского клуба) of Soviet dissidents that had been in existence since the 1960s, and included the poet Evgenii Golovin (1938-2010) and the novelist Yuri Mamleev (1931-2015). This group develeoped an interest in Gurdjieff, and then in Traditionalism, and was also joined by Alexander Dugin.

Dzhemal and Dugin became friends, and together joined Pamyat, the first ever independent political organization to come into being in the USSR. After the collapse of the USSR, both Dzhemal and Dugin left Pamyat and proceeded independently, though both they and their respective followers remained generally on good terms. While Dugin became one of the leaders of the National Bolshevik Party, Dzhemal established the Party of the Islamic Renaissance in Astrakhan (in southern Russia), and then returned to Moscow, where he established and led the Islamic Committee of Russia. Neither organization was particularly significant, but Dzhemal himself became well known, both in the mainstream media and through his own books, which criticized modernity, especially in its global liberal form, from a perspective that mixed Traditionalism, politics, radicalism, and Islam. He had a small, informal group of followers.

Email ThisBlogThis!Share to TwitterShare to FacebookShare to Pinterest
Other posts on: deaths, Gurdjieff, Russia

A new article by Hans Thomas Hakl, “The Symbology of Hermeticism in the Work of Julius Evola” (in Lux in Tenebris: The Visual and the Symbolic in Western Esotericism, ed. Peter J. Forshaw, Leiden: Brill 2016), discusses Evola’s understanding of symbols, notably in the context of alchemy, and Evola’s La Tradizione Ermetica (The Hermetic Tradition, 1931).

Hakl looks in detail at the meaning of particular symbols, especially the Monas Hieroglyphica, showing in this instance how Evola drew on Cesare della Riviera (d. 1625) and thus, indirectly, on John Dee (1527-1608). He argues that it is important to remember that Evola’s work on the symbology of hermeticism “was written neither as a scholar nor as a practical alchemist… but purely and simply to demonstrate the ‘truth’ of his Traditional worldview.” For Evola, alchemy was a universal system, a point on which René Guénon disagreed.

Lux in Tenebris is published by Brill, and so sells for $202 (or €168). This may seem expensive, but there are also some other chapters that mention Traditionalism in passing: György E. Szönyi on “Myth and Magic: Victorian Enoch and Historical Contexts,” Aaron Cheak on “The Juncture of Transcendence and Concretion: Symbolique in René Schwaller de Lubicz,” and Joscelyn Godwin on “Esoteric Theories of Color.”
1 comment: