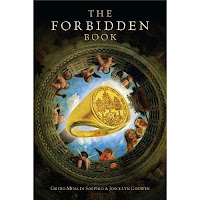 A fictional Italian baron with considerable expertise in the occult is one of the subjects of a new novel by Joscelyn Godwin and Guido Mina di Sospiro, The Forbidden Book (The Disinformation Company, 2012).

The "forbidden book" in The Forbidden Book is non-fictional, Il mondo magico de gli heroi of Cesare della Riviera, an alchemical text printed in 1605, with a revised edition in 1932 by a non-fictional Italian baron, Julius Evola. According to the afterword to The Forbidden Book, Evola is the direct inspiration for a central lecture on transcendence and the castes, and the "general philosophy of magic" found in the book is based on the writings of the Gruppo di Ur.

Currently only a kindle; those who want paper must either read it in Spanish, Russian, Danish, Greek, Polish, Rumanian or Bulgarian (translations into these languages preceded the English publication) or wait: I'm told an English non-kindle version is on its way early next spring, from Red Wheel/Weiser.

This is a revised and corrected version of an earlier post with the same title.
2 comments:

Email ThisBlogThis!Share to TwitterShare to FacebookShare to Pinterest
Other posts on: Evola, fiction, new books

An unusual course is being offered this Fall, by Thomas F. Bertonneau, who teaches at SUNY Oswego (Oswego, NY). It is entitled "Modern Anti-Modern Discourse: The Critique of Pure Modernity from 1920 to 2001."

Unusually, Bertonneau has published an article about his forthcoming course: "'I Told You So': The Critique of Pure Modernity from 1920 to 2001," Academic Questions online first, July 13, 2012. The authors chosen for the course are Nicolas Berdyaev (author of The Fate of Man in the Modern World, 1935), T. S. Eliot, René Girard (for I See Satan Fall Like Lightning, 2001), René Guénon, José Ortega y Gasset, and Eric Voegelin. It seems from the article that Voegelin was Bertonneau's own point of introduction to anti-modernism.

As well as teaching at  SUNY Oswego, Bertonneau has a blog at the conservative Brussels Journal and an amusing list of extracts from student essays at Taki's Magazine.