A new translation of the essential works of René Guénon is being prepared in Brazilian Portuguese.

Subscribers to the series (link here) will receive the following titles:

A new publisher, Estrela da Manhã (Morning Star), has been set up for this purpose. 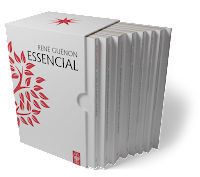 One of those behind the series is Luiz Gonzaga de Carvalho Neto (born 1971), a son of the late Olavo de Carvalho (1947-2022), once the leader of the Maryamiyya in Brazil and then an influential “Catholic” philosopher,   admired by President Bolsonaro, whose online lectures were extremely popular.

Luiz de Carvalho, who probably first learned about Traditionalism as a child, has for some time been giving on-line courses at the Instituto Cultural Lux et Sapientia (Light and Wisdom Cultural Center), which does not self-identify as a Traditionalist organization, but encourages visitors to “learn traditional cosmovision and have a life with meaning.” In 2015, its recommended introductory reading list listed six books, five of which were by Traditionalist authors, including one by Olavo de Carvalho from his Traditionalist period.

Purchasers of the series get three free lectures with Luiz de Carvalho, who seems to be following in his father’s footsteps, both as lecturer and as Traditionalist.

My thanks to DP for drawing my attention to the new translation.