René Guénon and Julius Evola played important roles in the early intellectual development of Russia's Alexander Dugin, and Dugin still refers approvingly to the Traditionalist critique of modernity. In recent years, however, Martin Heidegger has become increasingly important to him. Dugin gave Heidegger in 2009 as "the most profound-ontological-foundation" for his "Fourth Political Theory," and published an entire book on Heidegger, Мартин Хайдеггер: философия другого начала (Martin Heidegger: The Philosophy of Another Beginning) in 2010. This book is now available in English translation (Radix, $28), with a preface by the American Paleoconservative Paul E. Gottfried.

The question of the relationship between Heidegger and Traditionalism has been raised before in this blog, in response to an article on the topic by John J. Reilly. An anonymous comment pointed out that Heidegger was anti-metaphysical, and so fundamentally at odds with Traditionalism. Much this point was accepted by Thomas Vašek in a recent article in the Frankfurter Allgemeine Zeitung, in the context of a discussion of the implications of Vašek's discovery that Heidegger had copied into his notebooks a long passage from the 1935 German translation of Evola's Revolt Against the Modern World. Vašek points out that Evola and Heidegger both understood and condemned modernity as the "reign of quantity." He accepts that Heidegger had no interest in what he calls "mythical high culture" (i.e. Tradition), but thinks that for Evola "mythical high culture... served only as a place-holder for the lost relation to transcendence, to true Being (Sein)." I am not convinced: I think mythical high culture was a lot more than a place-holder for Evola. What is not clear to me is how important "mythical high culture" now is for Dugin.

My thanks to J.W. for bringing Dugin's new book to my attention.
2 comments:

Email ThisBlogThis!Share to TwitterShare to FacebookShare to Pinterest
Other posts on: Heidegger, Russia 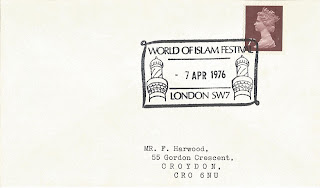 It is now 40 years since the World of Islam Festival opened in London in 1976. This was a major event, inspired and in many cases arranged by Maryamis, and succeeded in introducing the British public to Islam in terms of major achievements in culture and art. Unfortunately, stronger and very different impressions were then created by the Iranian Revolution.

To mark this  anniversary, a small exhibition and some lectures have been arranged jointly by the "Everyday Muslim" Project and the British Library, which was heavily involved in the original festival. It starts at 17:30 on Monday 25th April at the Brunei Theatre, SOAS, in London.

Speakers include Ahmed Paul Keeler, who was the Festival's director, Dr. Mohammed Isa Waley, Professor Salim Al-Hassani, Dr. Karim Lahham and Professor Oliver Watson. There will be Quran recitation by Ali Keeler. Tickets can be booked online, and further information is available from info@khizrafoundation.org.
3 comments: