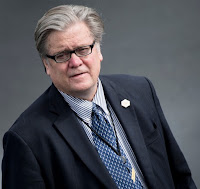 An excellent new article by Joshua Green in Vanity Fair finally explains René Guénon's importance for Steve Bannon. According to Green’s “Inside the Secret, Strange Origins of Steve Bannon’s Nationalist Fantasia,” Bannon first read Guénon when he was a young man in the US navy, and Guénon was “a life-changing discovery” for him. But, as Green says, Bannon is “more synthesist than strict adherent.” While at a personal level he may be a Traditionalist, at a political level Traditionalism is something that helps “build an intellectual basis for Trumpism, or what might more accurately be described as an American nationalist-Traditionalism.”

The article explains how Bannon’s Traditionalism fits with the Trump campaign and with some of the Trump administration’s policies. It also explains what readers of this blog know well, but what others may not realize: that not all Traditionalists are alike—that a common interest in Guénon does not mean that Bannon shares all the views of Richard B. Spencer or Julius Evola.

The article is generally excellent, as I say, but goes rather too far in labeling Alexander Dugin as “Vladimir Putin’s chief ideologist.” Unlike Trump, Putin does not have a chief ideologist, and while Putin clearly does not disagree with much that Dugin says, his ideas have other sources.
9 comments:

Email ThisBlogThis!Share to TwitterShare to FacebookShare to Pinterest
Other posts on: America (North), Guénon, New Right

Evola in the Ukrainian parliament

Ukraine needs to be added to the list of countries where a political party inspired by Julius Evola is represented in parliament. The party in question is the National Corps (Національний корпус) of Andriy Biletsky (Андрій Євгенович Білецький, pictured). It currently has only two seats, but it does have its own militia, the Azov Regiment, a volunteer unit now under the umbrella of the Ukrainian National Guard that operates against pro-Russian forces in the eastern Ukraine.

The National Corps also has an international relations section headed by Elena Semenyaka, a young political scientist whose academic specialization is the Conservative Revolution. Semenyaka was previously identified with Alexander Dugin and the Russian Eurasianists, but since Dugin and his Russian followers support the pro-Russian forces in the eastern Ukraine, Semenyaka and her colleagues are now engaged in trying to steer the European right away from Russia towards an “Intermarium Union” that aims to unite Ukraine with other eastern and central European countries, in effect a rightist version of the Visegrád Group. The Intermarium Union takes its name from a plan developed by the interwar Polish prime minister, Marshal Józef Piłsudski.

Interest in Evola in Ukraine is not restricted to the National Corps. It also includes members of Plomin’ (Пломінь, Flame), a “literary club” in Kiev that meets for lectures on philosophers and political thinkers, notably Evola and the thinkers of the Conservative Revolution.
4 comments: