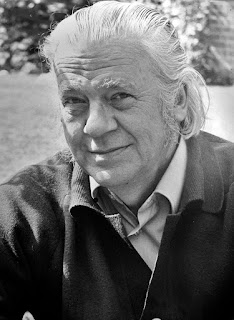 A new article in the Journal of the History of Economic Thought traces the path followed by E. F. Schumacher (1911-77, pictured) from being a “relatively conventional economist” to writing the iconoclastic best-seller Small is Beautiful, and then to Traditionalism. The article, “E. F. Schumacher and the Making of ‘Buddhist Economics,’ 1950–1973,” is by Robert Leonard, Professor of Economics at the University of Québec.

Leonard is more interested in the origins of Small is Beautiful (1973) than in Schumacher’s Traditionalism, which from his perspective is justified, as it was Small is Beautiful that had a major impact; Schumacher’s later, Traditionalist A Guide for the Perplexed (1977) was less widely read. Even so, the article shows clearly how Schumacher encountered Traditionalism—and it was not, nor at least not mostly, through Lord Northbourne (1896-1982), as I suggested might have been the case in an earlier blog post.

What lay behind Small is Beautiful was first the impact on a German (Schumacher was born in Bonn) who had spent the Second World War in England of seeing what had happened to Germany in his absence. This led Schumacher to difficult questions and then to the Fourth Way of George Gurdjieff (died 1949). He translated The New Man by the Gurdjieff teacher Maurice Nicoll (1884-1953) into German, and spent time with the Gurdjieff teacher and one-time Sufi J. G. Bennett (1897-1974) at Coombe Springs (later famously acquired by Idries Shah, 1924-96).

When he went to Burma on assignment in 1955, Schumacher initially agreed with another German-British former follower of Bennett living in Burma, the anthropologist and film-maker Gulla Pfeffer (1887-1967), that Gurdjieff’s teaching was really Buddhism—an interesting counterpart to those who were at about the same time concluding that Gurdjieff’s teaching was really Sufism. Pfeffer suggested that Gurdjieff had learned his teachings from “a monastery in Upper Burma," but Schumacher did not go so far: “What we in England call ‘Work’ [the Gurdjieff method] is everywhere here a living thing,” he wrote. “I find that the G./O. [Gurdjieff/Ouspensky] teaching… is remarkably accurate. ‘Self-remembering’ is identical (as far as I can see) with ‘Sattipatthana’ [awareness] as it is being taught here.”

The next ingredients were Gandhi (1869-1948) and swadeshi (self-sufficiency), a nationalist doctrine of local production that Gandhi modified and promoted, and which was then much discussed. It has echoes in today’s local source and ethical trade movements--and, of course, in Small is Beautiful.

Schumacher's path, then, is clear. It was the war-time devastation of Germany, Gurdjieff, and Buddhism, then, that helped structure his reaction to Burma. Next come Gandhi and swadeshi. This gives us Small is Beautiful, and also gives us an interested reader of Ananada Coomaraswamy’s Art and Swadeshi (1912). Coomaraswamy then naturally leads to René Guénon, Traditionalism, and A Guide for the Perplexed. Clear.
1 comment:

The Russian scholar Victor Shnirelman has published a chapter on “Alexander Dugin: Between eschatology, esotericism, and conspiracy theory” in the Handbook of Conspiracy Theory and Contemporary Religion, edited by Asbjørn Dyrendal, David G. Robertson and Egil Asprem (Brill, 2018), pp. 443-460.

Shnirelman starts by describing Dugin as “a remarkable figure in the dull Russian political scene,” which is certainly true. He then looks at Dugin’s writings on conspiracy from 1991 to the present, paying special attention to the changing roles ascribed to the Jews, and showing how Dugin’s views on conspiracy reflect his eschatology and thus, by extension, his Traditionalism. The Kali Yuga, after all, can become a version of the end times. Conspiracy, argues Shnirelman, is a “contemporary, secularized version” of eschatology. "Whereas eschatology can be satisfied with an obscure image of... 'dark forces,' conspiracy demands an image of more definite enemies."

The main sources for this are the letter from Guénon to Jacques Masui of March 15 1950 that an anonymous reader kindly posted almost in its entirety as a comment to my original post, and a comment in Roger Lipsey’s Gurdjieff Reconsidered (2019).

In his letter to Masui, Guénon concludes that Gurdjieff’s school was not “authentically initiatic” as Gurdjieff was not “attach[ed]… to a particular traditional form.” Despite this, Gurdjieff was “something other than a charlatan.” Further, Guénon tells Masui that he had once known “Salzmann” well (presumably Alexander de Salzmann) and that he had read Peter Ouspensky’s In Search of the Miraculous (1949) in typescript before its publication. In Search of the Miraculous, one of the key texts of the Gurdjieff school, had been circulating for some time in typescript among Gurdjieff's followers before publication, and so was evidently available in more than two or three copies, but even so it is significant that someone had lent a copy to Guénon.

For the other side of this relationship we turn to Lipsey, who reports that Guénon’s works were once “all but ‘required reading’ for participants in the Gurdjieff teaching” (p. 279). Lipsey does not give his source for this, but it fits with the reported visit by Jeanne de Salzmann to Guénon in Cairo after Gurdjieff’s death, i.e. in about 1950, for which the source is Whitall Perry’s Gurdjieff in the Light of Tradition (1978). If Guénon had known Alexander de Salzmann well, that would have been in Paris before Guénon left for Cairo in 1930, so a visit by Jeanne de Salzmann in 1950 indicates a friendship lasting more than twenty years.

As Lipsey notes, Gurdjieff in the Light of Tradition is an attack on Gurdjieff, and was presumably approved by Frithjof Schuon, so we can conclude that the relationship of mutual respect between Traditionalists and the Salzmanns had ended by 1974, when Perry published (in Studies in Comparative Religion) the first of two articles on “Gurdjieff in the Light of Tradition” that later became the book.

My thanks to whoever posted the comment with the letter to Masui, and to Xavier Accart for help with the letter and for the reference to Perry for the 1950 visit.
8 comments:

Email ThisBlogThis!Share to TwitterShare to FacebookShare to Pinterest
Other posts on: Guénon, Gurdjieff, Maryamiyya

New article on Aguéli and Swedenborg

Simon Sorgenfrei, a Swedish scholar, has just published an article on "The Great Aesthetic Inspiration: On Ivan Aguéli’s Reading of Swedenborg," in Religion and the Arts 23 (2019), pp. 1–25.

The article starts with the personal links between Aguéli and Adolph Boyesen (1823–1916), a notable Swedenborgian pastor in Stockholm. It follows Aguéli to Paris and into the Theosophical lodge Ananta, and then into anarchist circles and jail. The main point of the article, however, is to review Aguéli's views on aesthetics, esotericism, modernism, monotheism, painting, and religion, mostly from Aguéli's correspondence, and to compare these systematically with the views of Swedenborg, and with some other influences of the time.

The article is fascinating, and totally convincing. Sorgenfrei knows both his Aguéli and his Swedenborg well.
No comments: