Dugin removed from Amazon US 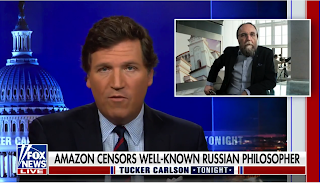 If you want to buy a book by the Russian Traditionalist (or post-Traditionalist) Alexander Dugin, do not go to Amazon.com. They have vanished, apparently because of US sanctions against Dugin. However, you can still buy Dugin at Amazon.co.uk or Amazon.de.

Thanks for this information to Tucker Carlson of Fox News (see photo). Carlson, a prominent "conservative" American journalist, does not approve of the way that "the Biden administration is demanding Amazon censor books they disagree with." For Carlson, "Dugin is one of Russia's most famous authors and political philosophers." The US government has to right to censor books, and is behaving a bit like the Ukrainian government, which murdered Dugin's daughter because "she said the wrong thing." Read more here, and watch the video (spoiler: Carlson cannot pronounce Dugin's name).

René Guénon was initiated into Sufism in 1910 by Ivan Aguéli (Abd al-Hadi), who was also influential in the very earliest development of Traditionalism. The 2021 collection on Aguéli, Anarchist, Artist, Sufi: The Politics, Painting, and Esotericism of Ivan Aguéli, was originally published in hardback and priced for library sales, but is now available in paperback at the more reasonable price of $39.95/£28.99, with a further discount if bought direct from the publisher, Bloomsbury, at www.bloomsbury.com.
No comments: