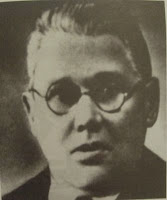 Christian Giudice of Gothenburg University has just successfully defended a PhD thesis on "Occultism and Traditionalism: Arturo Reghini and the Antimodern Reaction in Early Twentieth-Century Italy." The thesis is available online here.

Reghini (pictured) is the leading figure in the Italian Traditionalist movement to which Julius Evola at one point belonged, and was in contact with René Guénon during the 1920s, helping Guénon with L'ésotérisme de Dante (The Esoterism of Dante, 1925). He is best known as the author of  "Imperialismo Pagano" (Heathen imperialism), published in 1914 and then republished in 1924, the inspiration for Julius Evola's famous work of the same title. Reghini, however, rejected Guénon's interest in the East and drew instead at the Roman Tradition.

As Giudice shows, the links between Italian Traditionalism and Guénonian Traditionalism go back to 1910, when Guénon was visited in Paris by Reghini's mentor Amedeo Rocco Armentano (1886-1966) and by Giulio Guerrieri (1885-1963), both of the Schola Italica (Italic School), a neo-Pythagorean initiatory order to which Reghini also belonged.

After an introduction, the second chapter of the thesis gives the nineteenth-century background to Italian Traditionalism, including the close association between Italian nationalism and Freemasonry on the one hand and anti-Catholicism on the other hand during the Risorgimento. Chapters three and four cover Reghini's early years, including his encounter with Theosophy and subsequent turn towards the Schola Italica, the Florentine avant-garde, and Freemasonry. Chapter five focuses on Reghini's most important article, "Imperialismo Pagano," a translation of which is provided in an appendix. In this context, "imperialism" refers to a particular understanding of the natural future of the Italian nation: in a sense, imperialismo pagano is really anti-Catholic Italian nationalism. Reghini's article celebrates Dante as well as Giuseppe Mazzini and Giuseppe Garibaldi. It draws on Virgil, Pythagoras, and ancient religion.

Chapters six and seven will be of most interest to readers interested more in Traditionalism in general than in purely Italian Traditionalism. Chapter six covers the early Italian reception of Guénon's work, and especially of his idea of an intellectual elite. It also considers the Guénon-Reghini correspondence (1923-26), including Reghini's contribution to Guénon's L'Éstoerisme de Dante. Chapter seven considers the journal Atanòr, which published Guénon and Evola, and its successor, Ur. It ends with the end of the dream of a Roman imperialism represented by the 1929 Concordat between Mussolini and the Catholic Church. Chapter seven covers the remainder of Reghini's life after this, and chapter eight is  a conclusion.

Giudice's thesis represents an important piece in the jigsaw that is the history of Traditionalism, showing that the Italian Traditionalism that produced Evola was not just a local version of Guénonian Traditionalism, but also had its own very specific origins and characteristics.
1 comment:

Email ThisBlogThis!Share to TwitterShare to FacebookShare to Pinterest
Other posts on: Italy, new theses, Reghini

Traditionalism in the Trump-era mainstream? 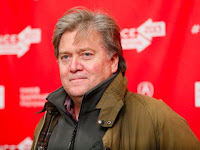 Bannon argued that many of Vladimir Putin's views were underpinned by Eurasianism, and noted "he’s got an adviser who harkens back to Julius Evola and different writers of the early 20th century who are really the supporters of what’s called the traditionalist movement." This adviser could hardly be anyone but Dugin. "We the Judeo-Christian West," continued Bannon, "really have to look at what he [Putin]’s talking about as far as traditionalism goes — particularly the sense of where it supports the underpinnings of nationalism."

At first sight, this looks like an endorsement of Traditionalism, Evola, and Dugin. But it is not clear that Bannon really knows that much about Traditionalism, which he glosses as "standing up for traditional institutions," which is not quite the point. His source for Dugin may be an article published in Breitbart in 2014, "Putin's Rasputin: The Mad Mystic Who Inspired Russia's Leader," which mentions Evola but says almost nothng about his thought. Otherwise, Evola has only been mentioned occasionally on Breitbart, as in 2016 in "An Establishment Conservative’s Guide to The Alt-Right," where he was named in passing as one of the intellectual origins of the alternative right.

My thanks to Rodrigo Adem for drawing my attention to this speech.
4 comments:

The archives of Louis Charbonneau-Lassay

Gauthier Pierozak, the manager of the invaluable René Guénon archive at www.index-rene-guenon.org, is using crowdfunding to try to gather donations that will help him purchase the archives of Louis Charbonneau-Lassay (1871-1946), the specialist in Christian symbolism, author of The Bestiary of Christ, and friend of Guénon.

Pierozak plans to scan the archives for public access through an internet website, and then offer them to a museum or similar organization for preservation. He has now raised €8,193 and aims at €10,000

Details of the project are available at www.ulule.com/archives-charbonneau-lassay.
No comments:

Email ThisBlogThis!Share to TwitterShare to FacebookShare to Pinterest
Other posts on: Christianity, France, text archives

An article on the Maryamiyya has just (November 2) been published in CounterPunch, "the fearless voice of the American Left," which "tells the facts and names the names."

The article, "Sufism in the Service of Empire: the Case of the Maryamiyyah" by the Berlin-based Iranian intellectual Wahid Azal, focuses on the Maryamiyya's influence today, after presenting Frithjof Schuon and the Maryamiyya (with an emphasis on the most problematic details in its history) by way of background. The names that Azal names are Prince Charles, Ibrahim Kalin (President Erdoğan's press secretary and associate), Prince Ghazi of Jordan, and Alexander Dugin. He refers to Maryami influence in Morocco, the Gulf, and Saudi Arabia, but without naming names. He then also names names within "the Islamic/Mid East Studies establishment of the Western Ivory Tower" (William Chittick, Terry Moore, Hasan Awan, Reza-Shah Kazemi and Alan Godlas) and in Iran (Gholamreza Avani).

Azal's conclusion is that while Sufism has historically often opposed colonialism and empire, "Western... Sufism has increasingly gone in another direction, allying itself more and more with the agendas of Western establishments and the core interests of Empire in the Muslim world." This, in Azal's view, is true of the Naqshbandi-Haqqani Sufi Order as well as to the Maryamiyya, and is "as big a betrayal of the ‘Tradition’ as Islamism itself is."

I think what really explains the alliance between much of Western Sufism and Western establishments today is the familiar logic that makes a friend of my enemy's enemy. Western Sufis are invariably hostile to Islamism, Salafism and so on, which is generally hostile to them. The so-called Islamic State, for example, has also denounced the Naqshbandi-Haqqani Sufi Order, for its theology and for being "quick to ally with any tāghūt [idolators] who will allow them to spread their message," the main idolators being the Americans (Dabiq 14, Rajab 1437 [April 2016], p. 15).

Azal also refers in passing to my Against the Modern World and quotes the allegation of Mark Koslow that, as a result of threats of legal action against Oxford University Press, I "backed down and published a rather weak assessment of Schuon’s polygamous activities, criminal actions, visions of nude Virgins and delusions of grandeur." It is true that I went through the manuscript of Against the Modern World with a lawyer to make sure that everything in the text that was finally published would stand up in court if necessary, and that this necessitated some changes. In the end, however, I still managed to say everything important that I thought needed to be said.