In this article, Payne introduces Tradiitonalism for those who do now know it, and then looks at representations of Buddhism by Frithjof Schuon, Julius Evola, Marco Pallis, Ananda Coomaraswamy, Mircea Eliade, and Huston Smith. He argues that their representations are inevitably dated--given that scholarship has moved on since they wrote--but that that their work should not be dismissed, because of "the depth of influence of the Traditionalist understandings of religion and of Buddhism" (p. 208). He understands Traditionalism as "a dogmatic core belief that provides a systematic hermeneutic" (p. 203), and concludes:


There are two important aspects of Buddhist doctrine that the Traditionalist interpretations overcode, recreating Buddhism in the model of Traditionalist presumptions regarding the nature of human existence, the world, and the path/goal. One is the interpretation of Buddhist ontology within a Neoplatonic framework as simply another instance of a hierarchy of truths. The other is the interpretation of awakening within a Perennialist framework as simply another instance of a single and universal category of mystical experience. Because both Neoplatonism and Perennialism function almost pre-reflectively in American popular religious culture these two acts of overcoding Buddhist doctrines are usually invisible (pp. 208-09).

Schuon's father was an Anthroposophist, that is a follower of the Anthroposophy of Rudolf Steiner, and as a young man Schuon participated in spritist séances.

Interesting background, told by Schuon to Hugo Bergmann (who was himself interested in Steiner) in 1957, according to a letter of Bergman's reprinted in an article by Paul Fenton.
7 comments:

Email ThisBlogThis!Share to TwitterShare to FacebookShare to Pinterest
Other posts on: Maryamiyya 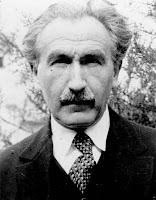 In a recent article, Paul Fenton tells the story of the relations between Samuel Hugo Bergmann and Frithjof Schuon.

Bergmann was a Jewish philosopher who was born in Prague, a friend of Kafka and Max Brod. He moved to Israel in 1920 and taught philosophy at the Hebrew University of Jerusalem, of which he was rector from 1935 to 1938. He became friends with Gershom Scholem and, especially, Martin Buber, with whom he founded Brit Shalom (covenant of peace), a small but important Zionist organization that pursued the forlorn hope of a bi-national state in which Jews and Arabs would live together in peace.

In 1957, on a trip to Europe, Bergmann met Schuon twice, meetings which he described as the high point of his trip. These meetings were a success on an intellectual level, but not on a personal level: Bergmann described the first encounter as “painful,” as Schuon seemed to him “stilted” and “affected,” dressed “as a prophet.” Despite this, the two men continued corresponding until 1970.

On his return to Israel, Bergmann wrote an article on Guénon for the Festschrift for Scholem which may be the most important piece on Traditionalism to have appeared in Hebrew.
No comments:

Email ThisBlogThis!Share to TwitterShare to FacebookShare to Pinterest
Other posts on: Judaism, Maryamiyya

Jews in the Maryamiyya

On August 15 I described Rabbi Yéhouda Léon Askénazi as "almost the only significant Jewish figure to have taken a deep interest in Traditionalism." And then on August 18, I read a new(-ish) article by Paul B. Fenton, "Les judéos-soufis de Lausanne: Un point de rencontre dans la mouvance guénonienne" (in Réceptions de la cabale, ed. Pierre Gisel and Lucie Kaennel; Tel Aviv: L'éclat, 2007, pp. 283-313) in which one argument (made in a book published in Israel, by the way)  is that there were a disproportionate number of Jews among the followers of Frithjof Schuon in Lausanne.

Fenton does not pursue this argument, which is made in passing. And I am not sure that he is right. He certainly draws attention to another very significant Jewish figure with a real interest in Traditionalism (see separate post), and he is right that there were a number of Jews among Schuon's followers in Lausanne, some of whom became Maryami Muslims and some of whom did not. He points to a continuing interest in the kabbalah among these, which Schuon did not share--strangely, he held that there was no inititation in Judaism.

But a disproportionate number? Disproportionate to what? To the overall Jewish element in the population of Switzerland, perhaps--but I am not sure that is a relevant measure. In general, what was the rate of Jewish participation in the intellectual avant-garde of the time?
No comments:

Email ThisBlogThis!Share to TwitterShare to FacebookShare to Pinterest
Other posts on: Judaism, Maryamiyya, new articles

A review by M. Ali Lakhani from Sacred Web is available online, and goes into some detail regarding Schuon's alleged syncretism.
No comments:

Email ThisBlogThis!Share to TwitterShare to FacebookShare to Pinterest
Other posts on: Maryamiyya, new books

A Soft Traditionalist Rabbi on Christianity and Islam

A new article on Rabbi Yéhouda Léon Askénazi (“Manitou,” 1922-96), almost the only significant Jewish figure to have taken a deep interest in Traditionalism (this is my first even blog post to use the index "Judaism").

Born in Algeria, Manitou was deeply read in French thought, as well as in Orthodox Judaism and the kabbalah. He agreed with Guénon that what mattered was the original philosophia perennis, in esoteric as well as exoteric form, but disagreed with Guénon about what this was. For Manitou, the original revelation was, simply, Judaism–and the esoterism that mattered was the kabbalah.

In “From Monologues to Possible Dialogue: Judaism’s Attitude towards Christianity According to the Philosophy of R. Yéhouda Léon Askénazi (Manitou)” (In Interaction Between Judaism and Christianity in History, Religion, Art, and Literature, Marcel Poorthuis, Joshua Schwartz, and Joseph Turner, eds., Leiden: Brill, 2009, pp. 319-336), Yossef Charvit examines Manitou’s views on Christianity and Islam, the background to a participation in inter-faith dialogue which included writing a special prayer for the opening of what Charvit calls the “Temple de l’Universel,” presumably the Sanctuaire de l’Universel, a Parisian multi-faith venture of the very un-Traditionalist Sufi Pir Vilayat Inayat Khan.

Christianity, Manitou thought, “purported to be the New Israel,” (p. 332) and in beginning to abandon this claim by recognizing that Israel was actually Israel, was approaching the day when all humanity might realize its “Abrahamic features.” Islam, in contrast, had never claimed to be the New Israel. When it came to Christianity, “Our theologies are highly polarized, but there are points of interface regarding ethics.” However, “The opposite is true of Islam, with which we possess theological interfaces but stand in diametric opposition regarding ethics” (p. 325). Unfortunately, Yossef Charvit does not examine Manitou’s views on Islam in much detail in this article; perhaps he will do so in another.
No comments:

Email ThisBlogThis!Share to TwitterShare to FacebookShare to Pinterest
Other posts on: Israel, Judaism, new articles

WE 175, "Introduction to Traditionalism"

These courses are being offered by the Phoenix Rising Academy, a recently founded private organization that specializes in esoteric studies and create arts, run by Sasha Chaitow, an assistant professor in Religious Studies at the Athens campus of the University of Indianapolis. Chaitow graduated from the Exeter Centre for the Study of Esotericism at the University of Exeter in England, as did George Sieg, who will be teaching "Introduction to Traditionalism" and whose PhD thesis was on "Occult War: The Legacy of Iranian Dualism and Its Continuing Influence upon the Modern Occult Revival."

So far as I can see, this should be a serious and interesting course. Not accredited, though the Phoenix Rising Academy says it is planning to apply for various accreditations once it is better established. And Sieg is assigning my Against the Modern World, which must be a good sign (?).
No comments: