Once again, Traditionalism has come to mainstream academic attention. Generally, when this happens, the result is clear rejection--but this time time the rejection was rather more cautious than usual.

Professor James Cutsinger reports that an outside review team noted the presence of two perennialists at the Department of Religious Studies at the University of South Carolina, and stated "as a committee we have no intellectual issue with perennialism per se," before making rather clear their reservations in practice about what they called a "somewhat esoteric approach to religion that is of interest primarily to a small and committed group of followers."

In comparison with previous rejections, this might even be seen as a sort of grudging acceptance.
No comments:

Email ThisBlogThis!Share to TwitterShare to FacebookShare to Pinterest
Other posts on: academia, America (North), Christianity

Well worth a visit: the website of Professor James Cutsinger of the University of South Carolina, an Orthodox Traditionalist. There is an excellent links section and an interesting blog.
No comments:

Email ThisBlogThis!Share to TwitterShare to FacebookShare to Pinterest
Other posts on: America (North), Christianity

Two new books on Eranos--new to me, at least:
McGuire clarifies a connection between Traditionalism and Eranos that I was sure would be there somewhere, but had not myself found.

Coomaraswamy was in correspondence with Eliade from at least 1936, and also knew Heinrich Zimmer, the Indologist of German origin who was close to Mary Mellon, patroness of Bollingen. Zimmer introduced Coomaraswamy to Mellon in about 1942; Coomaraswamy arranged Eliade's first job in the US (at a preparatory school in Arizona!!) in 1947, but it was Henry Corbin who first introduced Eliade to Eranos, where he became a hit from 1950 onwards.
No comments:

Email ThisBlogThis!Share to TwitterShare to FacebookShare to Pinterest
Other posts on: Coomaraswamy, Eliade, new books 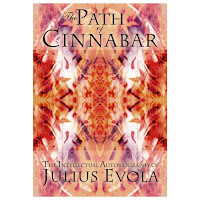 For thsoe who don't read Italian or French, Evola's Il Camino del Cinabro (1963) is now available in English translation as The Path of Cinnabar. € 27.95 from Integral Tradition Publishing.

Email ThisBlogThis!Share to TwitterShare to FacebookShare to Pinterest
Other posts on: Evola, new books

Along with several other figures in Russian politics, Alexander Dugin seems to be courting the Cossacks. One can notice Cossacks in Eurasian demonstrations in the Crimea, and there is a recent Dugin paper about them from his centre at Moscow State University (MGU). There are also news items illustrating closer political cooperation between Dugin and the Cossacks.

It is not only Dugin who is currently striving for more ties with the Cossacks, but also Dmitry Demushkin (also spelled Dyomushkin) of Slavic Unity (Slavyanski Soyuz, abbreviated as SS). See background below.

Clues to why this is happening are to be found both in the size of the Cossack movement – only Putin's United Russia can match it – and also in the latest composition of the State Duma. Since 2008 the most powerful Cossack chieftain, Viktor Vodolatsky, has a seat in the Duma thanks to a deal between the Cossacks and United Russia. A further 56 duma members have declared themselves to be Cossacks. Additionally, both army and FSB-border guard units are now granting privileges to Cossacks all over the country, not just in the south. Even in the Arctic Murmansk region Cossacks are being integrated into border units.

Unlike the older Russian National Unity (RNE--see background below), the SS claims to be primarily a Slavic movement. This difference is mostly a theoretical one, but the SS undeniably likes to highlight its friends in Ukraine, Belarus and Serbia. This means it is closer to Eurasianism than the RNE, although Dugin hardly wants to be associated with any of them. It may seem politically insane, but this does not hold true for the Cossacks. SS leader Dmitry Demushkin has even been made a colonel of the Cossacks and received a Cossack decoration, and SS delegates attended a major Cossack conference.

Background
The first major post-Soviet Russian fascist movement was arguably the black-clad Pamyat (Memory). A cultural movement in the 1970s, a political movement from 1987, it reached its peak strength around 1990. It never became a nation-wide phenomenon. Pamyat cornerstones were the Russian Orthodox Church, crude antisemitism and admiration for the prerevolutionary extreme nationalist "Black Hundreds". Alexander Dugin was briefly a part of Pamyat before he moved on to the National Bolshevik Party.
Then along came Russian National Unity (in Russian abbreviated RNE) under Alexander Barkashov – which went further, even using a Russian variant of the swastika as its main symbol. Incidentally, Barkashov too had started off in Pamyat. RNE was founded in 1990 and within a few years managed to expand to most Russian regions, and in some areas had an amazing presence on the streets – given its black uniforms and swastikas and the number of Russians citizens with a first-hand experience of National Socialism. RNE was without doubt the largest Russian radical nationalist organization with perhaps as many as a 100,000 members at its organizational peak in 1999.

RNE, like Pamyat, is still around. But ever since the year 2000--the year that party leader Alexander Barkashov was expelled from his own party for alcoholism, among other things--it has been in decline. Some months prior to that, RNE-member Dmitry Demushkin founded Slavic Unity, which in 2006 was transformed into what is officially the National Socialist Movement Slavic Unity, though it is still mostly called just Slavic Unity, SS.

Since its founding in September 1999 the SS has not reached the kind of mass that RNE once had. A recent estimate is a total of 1,500 members, mainly in Moscow and Saint Petersburg but with activist cells as far away as Vladivostok.

It may seem the SS is still a far call from RNE but there are three reasons that the SS warrant the attention of Russia analysts.
1 comment: 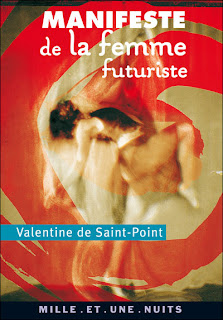 An anonymous comment on my earlier post has drawn my attention to her Manifeste de la femme futuriste (Manifesto of the futurist woman) of 1912. This is available in French in a new edition of 2005 (Paris, Mille et une Nuits) and in English translation in Mary Ann Caws, Manifesto: a century of isms (University of Nebraska Press, 2001), and makes fascinating reading in whatever language.

Like Evola, St.-Point is interested in virility, and like Evola, St.-Point distinguishes the spiritual from the biological. “It is absurd to divide humanity into men and women. It is composed only of masculinity and femininity.” Unlike Evola, she sees a need for a balance in these two essential principles: “The fecund periods, when the most heroes and geniuses come forth from the terrain of culture in all its ebullience, are rich in masculinity and femininity.” Like Guénon (and of course like many others at the time), she sees an age ending–an age dominated by femininity. A strong dose of virility, of the brute, was needed to restore balance and move on to the next age. Unlike Guénon, she placed the new age firmly in the future (she was a futurist, after all), associating “turning toward the past” with femininity.

Nancy Locke sees St.-Point’s Manifesto as Fascist (“Valentine de Saint-Point and the Fascist Construction of Women” in Matthew Affron and Mark Antliff, eds, Fascist visions: art and ideology in France and Italy, Princeton University Press, 1997) while Barbara Spackman sees it as pre-Fascist (“Fascist Women and the Rhetoric of Virility” in Robin Pickering-Iazzi, ed., Mothers of invention: women, Italian fascism, and culture, University of Minnesota Press, 1995). In certain ways, both are right–depending very much on what one means by fascism, of course. Perhaps more accurately, Steven Aschheim sees it as "almost a parady of eclectic, erotic-liberationist Nietzscheanism" (The Nietzsche legacy in Germany, 1890-1990, University of California Press, 1994). 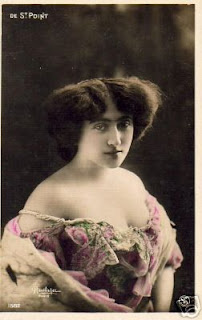 St.-Point provides yet another glimpse of the period and intellectual milieu out of which Traditionalism arose, even if she had no direct influence on its origins. Nietzsche, avant-garde art... and of course Theosophy too. St.-Point converted to Islam in Morocco in 1918, then spent several years with Blavatsky's works.

She moved to Cairo in 1924, and was initially involved in something like a Cairene version of her earlier life--a "Centre idéiste" and political activity in favor of the Egyptian and Syrian nationalists, rather like Aguéli some years before. She published a French-language journal, Phœnix, revue de la renaissance orientale (despite the widespread view in Egypt at the time that the Oriental Renaissance involved a renaissance of Arabic literature). Political activities ceased in 1928: she was expelled from Egypt, and the order was only rescinded after the intervention of the French embassy, and on condition that she abandon politics. Two years later, Guénon arrived and she became his closest French friend in Cairo.

There are a number of books on her in French, of which the most recent and most complete seems to be Véronique Richard de la Fuente, Valentine de Saint Point, une poétesse dans l'avant-garde Futuriste et méditerranéiste (Édition des Albères 2003).
2 comments: