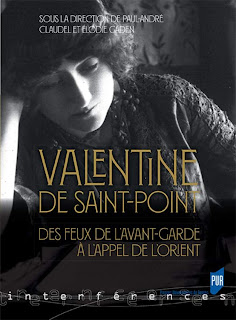 A new collection in French casts light on the life of Valentine de Saint-Point (1875-1953), best known for the first part of her life as poet and novelist, Futurist and feminist, but also a convert to Islam (as Rawhiya Nour Eddine) and friend of René Guénon in Cairo. It is Valentine de Saint-Point. Des feux de l'avant-garde à l'appel de l'Orient (Valentine de Saint-Point: From the Fires of the Avant-garde to the Call of the Orient), edited by Paul-André Claudel and Élodie Gaden, and published by the Presses Universitaires de Rennes (2019) at €28.

The book consists of seven sections: artistic beginnings, artistic experiments, “Latin Sisters: Artistic and Theoretical Dialog with Italy,” feminism, politics, influences, and inheritance. Most of these deal with the avant-garde. The call of the Orient is dealt with primarily in the section on politics, in which three of four chapters cover the last three decades of Saint-Point’s life, spent in Cairo, and her Islam. They are by Frédérique Poissonier, Daniel Lançon, and Alessandra Marchi. Poissonier looks primarily at French diplomatic correspondence relating to the attempted expulsion from Egypt of Saint-Point for conducting Bolshevik propaganda, Lançon looks most importantly at Saint-Point’s short-lived Egyptian journal, Le Phœnix. Revue de la renaissance orientale (The Phoenix: Review of the Oriental Renaissance), and Marchi looks at Saint-Point’s conversion to Islam, which she compares to that of an Italian contemporary of Saint-Point, the Italian anarchist (and friend of Benito Mussolini) Leda Rafanelli (1880-1971).

The main source for the relationship between Guénon and Saint-Point is Saint-Point herself, writing in the newspaper L’Egypte nouvelle in 1952, on the first anniversary of Guénon’s death. She had been forewarned of Guénon’s arrival in Cairo, she wrote, and during the years before Guénon’s marriage in 1934 he had visited her weekly, and they spent many hours together. She was not, however, a disciple of his, having made her own study of religions and esotericism before she met him. His work contributed some details to her understanding that were interesting, but “not indispensable.”

One writer who seems to have been more indispensable for Saint-Point was an earlier French esotericist, Alexandre Saint-Yves d’Alveydre (1842-1909), who was also appreciated by Guénon. This, and the fact that the circles Saint-Point had inhabited in Europe connected with those that Guénon had inhabited, probably explains the close relationship between Saint-Point and Guénon.

Saint-Yves was best known for a political system, “synarchy,” that he proposed as an alternative to anarchy. He was also known for his description of Agarttha, a subterranean synarchical utopia located somewhere in Asia, probably in India. Agarttha was described in Saint-Yves’ Mission de l'Inde en Europe, mission de l'Europe en Asie. La question du Mahatma et sa solution (India's mission in Europe, Europe's Mission in Asia: The Question of the Mahatma and its Solution), written in 1886 but withdrawn from the press and then not published until after Saint-Yves’ death, in 1910. Its final publication was the work of Papus (Gérard Encausse, 1865-1916), the founder of the Martinist Order, to which Guénon had once belonged. Encausse had acquired Saint-Yves’ papers.

Mission de l'Inde does not deal directly with the question of the Mahatma, which may have been added as a subtitle by Papus to improve sales. This question was raised by the Theosophist Helena Blavatsky (1831-91), who claimed to be in receipt of communications from enlightened adepts known as Mahatmas. It was never made clear who these Mahatmas were. Saint-Yves’ book suggests an answer: they were inhabitants of Agarttha, initiates who guarded the ancient, esoteric Tradition (given a capital T by Saint-Yves).

Guénon addressed the issue of Agarttha (now generally spelled Agartha) in Le roi du monde (The King of the World, 1927), treating accounts of it primarily as myth, and comparing them to other, similar myths. It seems, however, that he did on balance accept that Agarttha, or something like it, actually existed. So did Saint-Point, who wrote of Sufism as “anterior to Islam” and as connected to Agarttha. Guénon, of course, also saw Sufism as a repository of ancient, esoteric Tradition, though he would not necessarily have drawn a connection through Agarttha.

Saint-Point and Guénon agreed on a number of other points, too. Both valued Oriental civilization over Western civilization, which both condemned, and both were French converts to Islam. Again, there were differences, however. Saint-Point’s commitment to the Orient was political and activist, unlike Guénon’s. This was the motivation for her journal and the cause of her political difficulties, resolved only through the personal intervention of the French foreign minister, Aristide Briand (1862-1932), who knew Saint-Point’s ex-husband, Charles Dumont (1867-1939), a member of the French Senate who was twice minister of finance. Briand knew that Saint-Point was not a Bolshevik. Her anti-colonial agitation was probably inspired by Theosophy.

Saint-Point’s Islam was also different from Guénon’s. She admired Abd al-Aziz ibn Saud (1875-1953), the founder of the Kingdom of Saudi Arabia, who she saw as a “young patriot” who was “returning Muslimism [Musulmanisme] to its origins, to the Spirit.” She evidently knew little of Ibn Saud’s Wahhabism, and he probably appealed to her romantic view of Islam as “the religion of silence, the Voice that speaks in the desert, the poetry of horizons framed by the sands.”

Those who are interested in Agarttha and do not read French may refer to the English translation of Mission de l'Inde, as The Kingdom of Agarttha: A Journey into the Hollow Earth (Inner Traditions, 2008, $14.95), with an excellent introduction by Joscelyn Godwin which is recommended even to those who do read French.

[This post has been edited to remove a quotation incorrectly attributed to Saint-Point that was actually from Rafanelli.]
No comments:

Perennialism, hyperdiffusionism, and the end of the Kali Yuga in 2012

An interesting short article in Nova Religio contrasts perennialism and “hyperdiffusionism” in the context of understandings of the monuments left by vanished civilizations such as the Mayan and the Pharaonic. It is “The Highest Common Factor: Heterodox Archaeology and the Perennialist Milieu” by Kevin A. Whitesides, Nova Religio 22, no. 4 (May 2019): 27-43.

The term “hyperdiffusionism” was probably coined by Glyn Daniel in 1963, and denotes the widespread idea that contemporary human cultures all share a common origin in an earlier grand civilization. The difference between hyperdiffusionism and perennialism, Whiteside says, is that a hyperdiffusionist needs to show some sort of physical transmission, while a perennialist does not, as for a perennialist metaphysical knowledge is in some sense innate.

Whitesides gives three examples of approaches to ancient monuments and their civilizaitons. One, that of Augustus Le Plongeon (1826-1908), was purely hyperdiffusionist, arguing for a Mayan origin for all human wisdom and culture. Another, that of John Major Jenkins (1964-2017), was purely perennialist, arguing that the Mayans “independently tapped into the same doctrines also found in ancient Vedic and Egyptian cosmology.” A third, that of R. A. Schwaller de Lubicz (1887-1961) mixed both hyperdiffusionism and perennialism in his interpretation of Pharaonic monuments.

Jenkins himself is also interesting. He is best known for his part in promoting the idea, widespread during 2011 and 2012, that 21 December 2012 would have major eschatological significance—an idea that apparently helped boost sales of private underground blast shelters in the US. Jenkins based his arguemnts mostly on the Mayan calendar and the idea of “galactic alignment,” but he also drew on Ananda Coomaraswamy and René Guénon, identifying 2012 as the end of the Kali Yuga, in Galactic Alignment: The Transformation of Consciousness According to Mayan, Egyptian, and Vedic Traditions (Bear & Company, 2002).
9 comments: