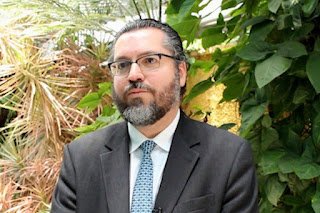 There has been some discussion of the impact of Traditionalism on the incoming government of Jair Bolsonaro, who will take over as president of Brazil on January 1, 2019. Olavo de Carvalho, the exiled Brazilian intellectual who is widely said to be one of Bolsonaro’s “gurus,” is a former Maryami, and is reported to have chosen Brazil’s incoming foreign minister, Ernesto Araújo (pictured), who has recommended the reading of René Guénon.

Bolsonaro clearly respects Carvalho, as was indicated by the choice of four books that he placed on the table in front of him for his acceptance speech on October 29, 2018, noted by Gaúcha: the Bible, the Brazilian constitution, Winston Churchill’s Memoirs of the Second World War, and Carvalho’s best-selling collection of essays, The Minimum you Need to Know Not to be an Idiot (O mínimo que você precisa saber para não ser um idiota). It is also likely that Carvalho’s recommendation played a part in the appointment of Araújo as foreign minister.

Carvalho, however, is no longer especially Traditionalist. Guénon is cited only twice in his The Minimum you Need to Know, and in a Facebook post in 2016, Carvalho denounced the Traditionalists, including Frithjof Schuon, for making it possible for “a small Islamic intellectual elite to dominate the intellectual elites of all religions… It is a huge power, which claims to be purely spiritual and unrelated to politics, but whose devastating political effects are clearly visible… Islam is already in the midst of a war of occupation.” Only in Carvalho’s consistently negative understandings of modernity can one see any traces of Traditionalism. Alexander Dugin, incidentally, came to similar conclusions in the course of a long on-line debate he held with Carvalho in 2011, which he finally regretting having started under the mistaken impression that Carvalho was “a representative of Brazilian traditionalist philosophers in the line of R. Guenon and J. Evola.”

Foreign Minister Araújo, however, may be a different case. Certainly, when he recommended the reading of Guénon in 2017, this was in an article on “Trump and the West” (“Trump e o Ocidente,” Cadernos de Política Exterior 3, no. 6, 2017, pp. 323-357) in which he commented on the influence of Guénon on Steve Bannon; he recommended the reading of Guénon to understand Bannon and what was going on in America, a position which might equally be taken by an opponent of Traditionalism. The recommended reading at the end of the article, however, tells a different story. It is short—only 13 works—and includes not only Guénon’s Crisis of the Modern World but also Julius Evola’s Metaphysics of War, to which there is a passing reference in the article. Guénon and Evola are joined by Nietzsche and Heidegger, Oswald Spengler, Carl Gustav Jung, and a few others, including Virgil and Aeschylus. Araújo’s blog, Metapolítica 17, does not refer to Guénon or Evola, but its title refers to a key concept originating with the French New Right (also not mentioned by name). Araújo, then, looks like an informed and sympathetic reader of the Traditionalists, at the least. One thing he has taken from Carvalho, however, is a pro-Christian and anti-Islamic position.

The new Brazilian minister of education, also said to have been recommended by Carvalho, is Ricardo Vélez-Rodríguez, a professor emeritus of philosophy who is definitely an intellectual of the Right, but refers to Alexis de Tocqueville rather than to Guénon, and does not show signs of interest in Traditionalism.

My thanks to Daniel Placido for drawing my attention to Araújo.
7 comments:

Call for papers: The Impact of Traditionalism on Contemporary Magical Communities

Traditionalism is a philosophical school which has significantly impacted religious communities and political movements in the twentieth and twenty first centuries, yet it remains virtually unknown among scholars and the general public. Yet when Steve Bannon cited Réne Guénon and Julius Evola as key influences in formulating his political positions, this inspired new interest in the history and ideas informing the growing Alt Right. However, both Guénon and Evola have been known within Pagan and occult communities for decades as esoteric theorists. Overall, the tenets of Traditionalism, which include Perennialism, the cultivation of an initiated elite, the notion of cyclical time, a past golden age and anti-modern sentiments, have increasingly impacted Pagan and occult communities, as some of these ideas are complementary to Pagan and occult aesthetics, values and practices.

A special volume of The Pomegranate will feature articles examining the ways in which Traditionalism has influenced Pagan and occult subcultures. Topics could include:


Please note that while papers may reflect the impact of Traditionalism on the Alt Right or New Right in relationship to these topics, that we would like to ensure that we focus on relevant philosophies and frameworks explicitly inspired by Traditionalism.

If you would like to contribute to this issue of The Pomegranate: The International Journal of Pagan Studies edited by Amy Hale, please submit an abstract of 300-500 words to amyhale93@gmail.com  by April 1, 2019. Final Submissions of 5000-8000 words will be due August 1, 2019.
No comments: