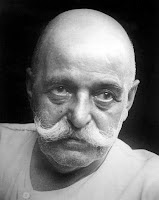 A recent interview has revealed more details about the origins of Russian Traditionalism in the 1960s: it all started with Gurdjieff.

In chapter 12 of Against the Modern World, I wrote "The attention of Yevgeny Golovin, a Russian poet known only to the circle of dissident or ‘independent’ intellectuals he led, was drawn to . . . Traditionalist writers in 1962 or 1963." Later in the chapter, I wrote that "the closest Golovin's circle came to action was that occasionally they would become very drunk," and mentioned Vladimir Stepanov as "a graduate of the Moscow Institute of Philosophy who belonged to Golovin's circle."
Later research has revealed that I got this somewhat wrong:
Arkady Rovner, who met Stepanov in 1964, explained (interview, Berlin, March 12, 2007) that Stepanov’s interests during the 1960s and early 1970s were principally in Gurdjieff, whose Fourth Way he had encountered in the Lenin Library via a book by Peter D. Ouspensky. Stepanov, Golovin, Haydar Jamal, Yuri Mamleyev and Rovner were among those who for a few years "almost lived" in the Lenin Library, not only reading but also eating and–above all–talking there. They formed a small and very close Gurdjieff group–or, Rovner insists, a "company," as its members were "too individualist" to form a group. They tried hard to do Gurdjieff’s Work, and were in contact with John G. Bennett (and hence, later, with Idries Shah and Robert Graves). Aspiring members of the Gurdjieff "company" were required to pass tests, such as wearing, for one week, one black and one brown shoe. If you read Russian, there is a paper on this by Rovner, "ГУРДЖИЕВСКОЕ ДВИЖЕНИЕ В РОССИИ 1960-х и 1970- ВОСПОМИНАНИЯ И РЕФЛЕКСИИ УЧАСТНИКА."
Rovner left the Soviet Union for the United States slightly before Mamleyev did, in 1973. At that point, the company had no interest in Evola–but did have some interest in Guénon, principally for the sake of the idea of the perennial tradition, which gave them a universalist perspective they could advance against what they saw as the more narrowly dogmatic and Orthodox ideas of people like Valentin Nikitin.
The development of an interest in Evola, then, started after 1973, and involved (especially) Golovin and Jamal–and Alexander Dugin encountered Traditionalism through an offshoot of what had originally been a Gurdjieff group.

Dugin (interview, Moscow, January 2006) recalled Golovin’s bateau ivre, discussed in the revised version of chapter 12. The name refers to Arthur Rimbaud’s poem, but may well also be a development of Stepanov’s Gurdjieffian "ship of fools." This may be a reference to Gurdjieff’s "toast to the idiots," or may be something else: see here.

Rovner is, since 2001, director of the Institute for Cultivation of Inner States (ICIS) in Moscow, the activities of which are inspired not only by Gurdjieff but also by Traditionalism.

Dugin to the rescue?

It is now 18 months since, in September 2005, Alexander Dugin announced the creation of an Anti-Orange Youth Front to help save Russia from a repeat of the Ukraine's Orange Revolution. No Orange Revolution seems immanent in Russia, but on March 3, 2007 an extra-parliamentary opposition organization, Those Who Disagree, did hold a march in St Petersburg that gathered some 5,000 anti-Putin protestors and made national television news. Among the organizers of this protest march was Dugin's former National Bolshevik colleague, Edward Limonov. Read the Komersant report.

Dugin has now announced a pro-Putin counter-march, for April 14, 2007, to be held in Moscow. According to Komersant, he expects to bring together only 1,500 marchers--rather fewer than gathered in St Petersburg. Dugin's marchers will come from the Eurasian Youth Union, the National Bolshevik Front (fomer National Bolsheviks who defected from Limonov to Dugin), and two Ukrainian groups, the Russian Bloc, and the Ukrainian Labor Conference. Guest of honor are to include Alexander Prokhanov, Maxim Kalashnikov, and Mikhail Leontyev.
1 comment:

When thinking about Dugin and today's Russia in general, have you ever wondered

This is the question asked by Professor Birgit Menzel of the University of Mainz, which a number of scholars will be trying to answer at the European Academy, Berlin, from Sunday 11 March to Tuesday 13 March. If you can't make it to Grunewald, the papers are at present available online--and include one in which I will argue that Dugin's Euasianism is more of a continuation of Soviet civilization than a break with it.

Email ThisBlogThis!Share to TwitterShare to FacebookShare to Pinterest
Other posts on: Conferences and lectures, Russia

Some interesting results from a poll conducted jointly by the EU-Russia Centre and the Levada Centre, "Voices from Russia: Society, Democracy, Europe."

The poll covered "a representative profile of the Russian population and socio-demographic mix," among Russians aged over 18 in 130 locations in 46 regions.

I have been asked to announce a new Yahoo group, the Radical Traditionalists of England. This group, previously known as 'The Social Credit League' [?], at present has six members, who

call for the restoration of true monarchy in England. We look to and take inspiration from HRH Prince Charles, a philosopher king in waiting, and support our Prince in his battles with the forces of wrongness. We see him as the natural heir to the Stuart monarchy, a Stuart in spirit and somewhat in blood. And so we wish for the return of the national arrangements in these islands that existed under the Stuarts where England, Scotland and Ireland sat as independent nations with the same King. We are not Catholic revivalists; we welcome Englishmen of all faiths including Muslims, but we are Perennialists and hope for an England returned to spiritual values, a diverse spirituality profound enough to connect through to the primal religion...
No comments: