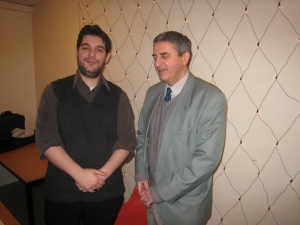 An Ivan Aguéli Study Group has been established in Uppsala, Sweden by Mohamed Omar (b. 1976, to the left in picture), a Swedish poet and journalist with an Iranian "biological father" who converted to Islam at the age of 16.

Mohamed Omar was previously popular in Sweden as a "moderate" Muslim, but in an article in the Swedish Kultur in 2009 declared that he had become a radical Muslim in response to events in Gaza. He describes his Ivan Aguéli Study Group as "radical and Islamist, "radical in the sense that we are looking inwards and backwards in the Islamic tradition, the roots, radices, to draw strength and inspiration. Everything new must build on the old and traditional" and Islamist in the normal, political sense. Mohamed Omar's "radicalism," then, has much in common with Traditionalism. The three stated requirements for membership of the study group are to speak good Swedish (which presumably excludes certain Muslim immigrants), to respect Islam, and to "have an anti-Zionist stance."

The study group seems to be becoming a center for one variety of Swedish Traditionalism. Guest speakers have included Ahmed Valsan (to the right in the picture), the Swedish-domiciled eldest son of the important Parisian Traditionalist Sufi shaykh of Romanian origin, and Lars Adelskog, not a Sufi but a former Swedish educator who lost his job after publishing a pamphlet entitled ”Är EU en judegrej?” ("Is the European Union a Jew thing?"). Adelskog is the translator into Swedish of Guénon's The Reign of Quantity, available on his website www.veidos.se,whioch also has an English-language section, in which he explains his version of P. D. Ouspensky's Fourth Way.

My thanks to Gustaf Görfelt for help with this posting.
No comments:

Email ThisBlogThis!Share to TwitterShare to FacebookShare to Pinterest
Other posts on: Scandinavia

New article on the work of Andrei Scrima

After a complex and nuanced discussion, Toti concludes that Scrima was not so much a hard Traditionalist (in the sense in which I use the adjective) as someone who "recovers, develops, deepens and recontextualizes some typical ‘traditionalist’ themes—softening, for example, the ‘mathematical’ orientation given by Guénon to them, and placing in his treatment poetic and philosophical motives which are completely irrelevant to the French metaphysician" (p. 94). This is much what Patrick Ringgenberg concluded in the case of Schuon (see earlier post here).


Scrima's life is not Toti's main subject, but he notes, interestingly, that Scrima was "one of the ‘inspirers’ for the establishment in Bucharest of the ‘New Europe College’, an institute for advanced studies in humanities founded in 1994 by Andrei Pleşu, former Foreign Minister and Minister of Culture of the Republic of Romania" (p. 78). The name of Pleşu has featured before in the history of Traditionalism in Romania.
No comments:

Email ThisBlogThis!Share to TwitterShare to FacebookShare to Pinterest
Other posts on: new articles, Romania

The article is a good introduction to "Guenonian Sufism" as "the last initiatory possibility in the West." It covers Abd-al-Wâhid Pallavicini especially well, focusing on his development of a Western Sufism which is Christian in its culture, European in its geographical location, and Guenonian in its "metapolitical projections."

One interesting detail for those who see Guénon as Muslim before his arrival in Cairo (which I, for one, do not): Guénon wrote in Orient et Occident (1924) « il ne nous paraît pas opportun de s’appuyer principalement sur l’ésotérisme islamique ; mais, naturellement, cela n’empêche pas que cet ésotérisme, étant d’essence proprement métaphysique, offre l’équivalent de ce qui se trouve dans les autres doctrines » -- that is, "it does not seem to us appropriate to rely principally on Islamic esotericism, but, naturally, this does not prevent this esotericim, being properly metaphysical in essence, from offering the equivalent of what is found in other doctrines." Hardly the words of a Muslim.

Thanks to HF for drawing this article to my attention.
3 comments:

Email ThisBlogThis!Share to TwitterShare to FacebookShare to Pinterest
Other posts on: France, Italy, new articles

I have just published a review of this book in Aries, and the review is available here.
No comments: