My attention has been drawn to an interesting new article on the relationship with Traditionalism of the French Cubist painter Albert Gleizes (1881-1953). Witten by the painter and scholar Peter Brooke, it is entitled "Albert Gleizes, Coomaraswamy and 'Tradition,'" and is available here.

My thanks to SJ for drawing my attention to this article.
No comments: 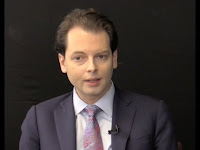 Ever since its launch in 2010, Arktos has been one of the major platforms for Traditionalist writings. But now its new editor-in-chief, Jason Reza Jorjani (born 1981, pictured), an American who describes himself as of Persian and Northern European descent, has published "Against Perennial Philosophy" (AltRight.com, October 21, 2016), in which he identified Traditionalism as the "greatest enemy."

The original basis of Arktos was that while there was wide agreement in certain circles that "that something has gone terribly wrong with the modern world," there were differences about whether the problem was political, sociological, spiritual or metaphysical, and consequent "internal squabbles." Arktos therefore sought to provide useful resources for what it called "the subculture of anti-modernity," not to "seek consistency." Its initial offerings, some of which it published itself and some of which it resold, included books by Frithjof Schuon, Ananda Coomaraswamy and John Michell, as well as Julius Evola, Alain de Benoist and Carl Schmitt. Since 2010, Arktos has commissioned and published English translations of Evola and Dugin, and carries works by both Benoist and the other leading author of the French New Right, Guillaume Faye. It sells most of the authors on Amazon's "top ten" list (see post here).

In his "Against Perennial Philosophy," a version of a lecture given to an American group called "Iranian Renaissance," Jorjani concludes that


Our greatest enemy in this venture [an Iranian renaissance] is not Islam, but the Traditionalist mentality of Javidan Kherad [Persian: eternal wisdom] or “Perennial Philosophy” that cannot tolerate fundamental uncertainty and honest intellectual conflict. This Javidan Kherad, which Leibniz imported into the West and Guénon later elaborated and used to legitimate Islam, has its origins in a false reconstruction of Sassanian culture on the basis of an Islamic-Mongol mentality that is truly going to be the death of us if we do not have the courage to free ourselves from it.

Jorjani certainly knows his Traditionalist history. Not only does he know about Javidan Kherad and the role played by Leibniz as well as by Guénon, but in his article he also refers to the Imperial Iranian Academy of Philosophy, Seyyed Hossein Nasr, and even Peter Lamborn Wilson (Hakim Bey).

Leaving aside possible reconstructions of Sassanian culture, Jorjani's argument is in many ways a classic one. "Revolutionary scientific and sociopolitical breakthroughs" require brilliant thinkers and freedom of thought, and brilliant thinkers are Aryan (which of course includes the Iranians, but not the Arabs), and the enemies of freedom of thought are the Abrahamic revelations and the problem that "if a society believes that there is an eternal, unchanging Wisdom that can be definitively attained... then that society will never see... scientific and political revolutions." If Christianity is preferable to Islam, that is because it is more incoherent, and so less powerful as "an eternal, unchanging Wisdom." In pitting Aryan Iranians against non-Aryan Arabs, Jorjani is following an argument that was developed in the nineteenth century and never became as problematic in Iran as it did in the post-Nazi West. In identifying Christianity as an obstacle to free thought, he is following many people, including Evola. In placing Islam in front of Christianity as an enemy, he is following Guillaume Faye--and abandoning Traditionalism.

That Jorjani is an anti-perennialist may have implications for the future of Arktos, though Arktos's original editor in chief, John B. Morgan (born 1973), notes in a comment to an earlier version of this post that "Arktos has always been a collective venture, and is subject to the decisions made by its Board and by its shareholders." According to Morgan, who remains on the board of Artktos, there is no intention to change the broad direction noted above. It also has wider implications. Jorjani has recently teamed up with Richard Spencer (born 1978) of the the National Policy Institute and, most famously, of the controversial 2016 post-election rally at which he controversially declared "Hail Trump! Hail our people! Hail victory!" Spencer was mentioned sympathetically in "An Establishment Conservative’s Guide To The Alt-Right" on Breitbart, previously edited by President Trump's powerful advisor Steve Bannon. Some have therefore associated Bannon with Traditionalism, pointing out that Spencer was married to Nina Kouprianova, the Russian-born translator of Dugin into English, and that Bannon has one one occasion referred to Dugin and Evola (see post here). But Bannon's association with Spencer is so weak as to be non-existent, and Jorjani is now identified not with Traditionalism but with an understanding of Islam as the enemy. Spencer is no longer married to Kouprianova.

Corrections: An earlier version of this post incorrectly stated that Richard Spencer writes for Breitbart. The Spencer who write for Breitbart is Robert Spencer of Jihad Watch, not Richard Spencer of the NPI. The earlier version also suggested that the appointment of Jorjani might have been responsible for a change in the direction of Arktos, a suggestion against which John B. Morgan argues in a comment to this post, and which I have therefore withdrawn.

Another book on Eurasianism

Alexander Dugin and Traditionalism are discussed in a new collection edited by Mark Bassin and Gonzalo Pozo, The Politics of Eurasianism: Identity, Popular Culture and Russia's Foreign Policy (London: Rowman and Littlefield, 2017).

The book takes "Eurasianism" in its widest sense, and Dugin's Eurasianism--what some call "Neo-Eurasianism"--is thus only one of the topics considered.

The book is divided into four parts.

Traditionalism is discussed explicitly only by Balázs Trencsényi, who notes its importance for the post-1980s alternative intellectual milieu in Hungary that drew on the work of Béla Hamvas, and the importance of this milieu and of Traditionalism for the Jobbik leader, Gábor Vona. This, in the view of Trencsényi, is one reason why Vona and Dugin see eye to eye. Another reason, he suggests, is that there is some evidence of Russian financial support for Jobbik. Trencsényi, incidentally, wrongly identifies Guénon as "an adherent of fascism."

Dugin is discussed especially by Shekhovtsov and by Erşen. Shekhovtsov shows that Dugin has long argued for the division of the Ukraine, explicitly in Foundations of Geopolitics (Основы Геополитики, 1997), but it is not clear to what extent he has actually played an important role in the recent Russian intervention. As Shekhovtsov reminds us, members of the Eurasian Youth Union (Евразийский Союз Молодежи, ESM) were early supporters of the secession of eastern Ukraine and established several branches there, but after their role in the spectacular destruction of Ukrainian national symbols atop Mount Hoverla in 2007 (see blog post), they suffered a split, were targeted by the Ukrainian security services, and declined in Ukraine. Other secessionists remained on good terms with Dugin, however, and when secessionism re-emerged after 2014, Dugin supported secession in his public pronouncements, and also encouraged ESM members to volunteer for action. So, however, did many other groups, and thus, as Shekhovtsov says, it "seems impossible to establish how successful or efficient the ESM was in recruiting the volunteers."

Interestingly, Shekhovtsov refers to a report by the Center for Economic and Political Reform, a Russian NGO, which shows Russian state financial support for the ESM (report available here). Dugin is often said to be close to the Russian state, but this is just as often disputed. Financial support for the ESM is evidence of a good working relationship. Sakwa, however, argues that Dugin’s "influence on Russian regime politics has been minimal" and notes that after his “militant and uncontrollable support for the insurgency in the Donbass," the Russian regime “fought back to control the monster of Russian nationalism." This makes sense: the Russian government undoubtedly wishes to use nationalism and Eurasianism, not be be used by it.

Erşen also considers Dugin's influence in Turkey. He covers familiar ground, and makes an important point: that while Dugin's anti-Westernism easily finds an appreciative audience in today's Turkey, his pro-Russianism does not.

A new article by Jean Page explains the conversion to Catholicism and subsequent political activities of the Australian Traditionalist James McAuley (1917-76). McAuley (pictured right) is best known for his part in the 1944 Ern Malley hoax, discussed in Peter Kelly's Buddha in a Bookshop (2007), reviewed on this blog. But he was also one of Australia's leading readers and exponents of Guénon and the other Traditionalists.

McAuley's search for tradition led him to one of the most traditional (in certain senses) of all societies: New Guinea, which he first visited in 1944. It was not, however, the Papuan and Austronesian inhabitants who ended his search, but a group of French Catholic missionaries at Kubuna. After long conversations in 1951 with the aged Archbishop Alain Marie Guynot de Boismenu (1870-1953), which included discussion of Traditionalism, McAuley joined the Roman Catholic Church.

After this conversion, McAuley remained a "soft" Traditionalist. He wrote articles with titles like "Tradition, Society and the Arts" (1952), and in 1954 objected to the plan to "develop" traditional communities, much as the soft Traditionalist E. F. Schumacher did, writing that "the world of industrial progress is a world of disinherited beings, cut off from the deepest sources of human satisfaction, restless and jangled, driven by unstilled cravings through a course of life without meaning or direction." He joined B. A. Santamaria (1915-98) in working against the influence of Communism in Australia.

The article, "Land of Apocalypse: James McAuley’s Encounter with the Spirit: the French Catholic Missions of the Sacred Heart, Kubuna and Yule Island, New Guinea," Journal of the Australian Catholic Historical Society 37 no. 1 (2016), pp. 18-31, is available online.
No comments: