A visitor to this blog recently wondered about the possibility of Traditionalism in Israel. 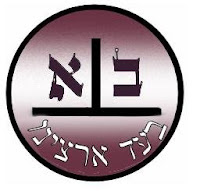 What we find in Israel is not exactly Traditionalism, but more a local version of Dugin's Eurasianism: ЗА РОДИНУ [Za Rodinu]/Be’ad Artzeinu [To our homeland], headed by Rabbi Avraam Shmulevich and--to some extent--by Avigdor Eskin. Both are Israeli citizens of Russian origin, and both were in Moscow for the founding congress of the Eurasia Movement.

Be’ad Artzeinu has a website, www.zarodinu.org, which is mostly in Russian, but also has a Hebrew section and a small English section. Rabbi Shmulevich also has a blog, avrom.livejournal.com.

Avigdor Eskin has a blog, avigdor-eskin.com.

The more famous of the two is Eskin, who responded to the Oslo Accords by laying a death curse (pulsa d’nura or "lashes of fire") on Prime Minister Yitzak Rabin in 1995. This curse is believed generally to work within a period of 30 days. Thirty-two days after Eskin’s curse, Rabin was shot dead by Yigal Amir (neither a Traditionalist nor of Russian origin, but rather a student from Herzliya), and as a result, in 1997 Eskin was sentenced to four months in prison for incitement.

I wrote in the second edition of Against the Modern World:

Be’ad Artzeinu claims several hundred members, mostly of Russian origin. Its leader, Shmulevich, describes himself as "Hyperzionist," regarding the earlier Zionism that led to the creation of the State of Israel as obsolete, a view that is held by many Israelis—Israel, after all, now clearly exists, and Zionism has thus fulfilled its goal. Few Israelis, however, would agree with the ideology that Shmulevich proposes to replace the original Zionism of the founders of the State. Israel, according to Shmulevich, has a global mission: to lead the way into the twenty-first century, molding it as—he contends—Jews such as Marx, Einstein and Freud molded the twentieth century. As a first step, Israel must not only defeat proposals for a Palestinian state and the threat of Islamism, but go on to expand her control to cover the entire Middle East from the Nile to the Euphrates. This control need not be military: the techniques of economic and social control suggested in the Protocols of the Learned Elders of Zion would do equally well. As a second step, Israel must "reinstate the most primal layer of Tradition [that of Adam, the first Hyperzionist], but any such reinstatement would be also based on fusion with the most modern tendencies found in a post-industrial society."

Although Be’ad Artzeinu is suspected of violent actions against Arabs in the "occupied" territories, it admits only (with one exception) to non-violent protests, though it also admits that its ultimate aim is revolution within Israel to replace the current political class with Hyperzionists. Its protests are colorful: the Hyperzionists wear red shirts and march in ordered ranks, led by a sheepdog called Fritz, who on one occasion ate a salami-laced cabbage painted as the head of Yasser Arafat.

Israeli journalists have suggested to Shmulevich that such paramilitary attire might appear reminiscent of groups such as Hitler’s SA, to which Shumelvich replies (correctly) that it was not only the SA that used such techniques, but also Betar, the youth movement of Revisionist Zionism, the ultimate origin of the present Likud party. Also, he explains, "Revolution has to inspire, not to bore. You have to know how to spread an idea. The uniform and the provocations are parts of the marketing; the wrappings around the goods have to attract attention." Much the same might be said of the NBP and of many of Dugin’s own activities.

Eskin and Shmulevich’s participation in a Eurasia Movement that aims to embrace much of the Islamic world is paradoxical. The alliance with Islam was clearly not the element of neo-Eurasianism that appealed to them. What did appeal was the anti-American elements in neo-Eurasianism, which fit well with many settlers’ view of their own government as betraying them, the Jewish people, and Zionism, under American pressure. Shmulevich’s explanation of this betrayal was the "process of subordination of the political elite to Western influence," against which neo-Eurasianism struggles.

Shmulevich and Eskin are more neo-Eurasianists than Traditionalists, and there is no evidence that Eskin has ever read Guénon. Even their neo-Eurasianism is a consequence rather than a cause of their other activities—Eskin’s stance preceded the development of neo-Eurasianism, and his first known political activity was in 1979, when, at age 19, he and three other young settlers were arrested for breaking into Palestinian houses in Hebron, where they "overturned furniture and assaulted inhabitants." Three years later, in 1981, Eskin was again arrested, this time during a protest in front of the Soviet Airline Aeroflot’s offices in New York, and charged with "rioting, unlawful assembly, disorderly conduct and attempted criminal mischief."

Email ThisBlogThis!Share to TwitterShare to FacebookShare to Pinterest
Other posts on: Israel, Russia

I'm wondering how many of the Traditionalists you have studied are Jews(not necessarily Israeli citiezens), or at least from certain forms of Jewish background?

Traditionalism seems generally to have interested Jews far less often than Christians or Muslims. One notable exception is Rav Léon Askénazi, discussed in pp. 194-96 of Against the Modern World.

Askénazi was important in the more Orthodox French Jewish community; after becoming convinced by the “religious” Zionism of Rav Kook, he made aliyah to Israel.

Askénazi wondered why Guénon missed the true primordial religion that was there for all to see–Judaism–and speculated that this might have been because Guénon’s family name suggested that he was actually of Jewish origin!

Askénazi wondered why Guénon missed the true primordial religion that was there for all to see–Judaism–and speculated that this might have been because Guénon’s family name suggested that he was actually of Jewish origin!

Exactly, that's what I was wondering! It seems to me that Traditionalists are more likely to retreat to a small enclave after they encountered drastic changes in life.(yes, some of them turned aggressively radical but many of them turned regressive) But that's only because they came from a traditional background in the first place! That's their comfort zone! And since Judiasim is the most "traditional" reglion of all the three monotheism, there is supposed to be more of them from the Jewish background, isn't it? That's the logic of my question.

But then I thought maybe it was exactly because Judiasim is so ancient and has undergone so much. It's traditional appeal has been "diluted" (nowadays, many Jews are completely secular and the entire Zionism project was secular too!) and that's why there are not many Traditionalists (most of them are born from the 1900s onwards which means pretty young!) from the Jewish background.

PS
I'm aware that there are many over-generalizations in my response. I'm just trying to over-simplify big ideas for the sake of logic training. It's not scientific at all. So, Dr. Segwick, please ignore my post! Thank you!

I consider myself a traditionalist and I am Israeli. It is true that not many Israelis have heard of Guénon or Evola, but the key concepts of traditionalism are definitely an integral part of Judaism and Zionism. After all, Zionism, despite being a secular movement, is the will of the Jewish folk to return to Israel after 2,000 years of exile, to return to its roots -- and that is obviously very traditionalist.

Thanks, Anonymous, for your comment. Any idea how many other readers of Guénon there are in Israel? Have you ever seen any references in print?

Not really. I do know though that websites such as A.N.U.S./Corrupt are slightly known by some - for the better and worse. I do not think that this state is unique for Israel, though, for in every modern state traditionalism is being suppressed to the underground by mass-media.

according to james wetmore {verbal communication} he had many orders for traditionalist books in israel and this was over ten years ago.
i am sure he would be glad to corroborate if he were contacted.

I have information that may be of interest to you in your research on traditionalism. Briefly, this email is with regards traditionlist influence of R. Leon Ashkenazi. It appears that Rabbi Ashkenazi had a student named R. Ouri Sherki (also spelled Uri Cherki or Uri Sherki)http://ravsharki.org/content/view/23/174/. Currently, Rabbi Sherki is an advisory Rabbi for Manhigut Yehudit. Manhigut Yehudit is a politically powerful religious Zionist faction of the Likud. The overt influence of traditionalism on Rabbi Sherki is not known. Manhigut Yehudit exterts enormous influence within the Likud albeit covertly.

Hopefully this tidbit of information is useful.