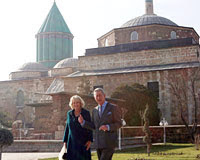 Prince Charles enjoys reading Rumi, according to his office's press release after his second visit to Konya, on November 26, 2007. His other visit was in 1992.

In a speech after the visit, Prince Charles quoted Kathleen Raine, referred to the work of the Temenos Academy, and also (once again) implied fairly clearly that he himself subscribes to some version of the perennial philosophy. Most interestingly, he was also explicit about how he combines this with his ecological views:

If we hope to create a more sustainable way of living with the grain of Nature rather than so destructively against it then, surely, it is only with our innate sense of the sacred intact ... The natural World, indeed the entire Universe, is rooted in and bound together by wholeness... By seeing the external and material world as the only reality, the modern industrialised world view too often considers “the part” to be “the whole.” But, in so doing, not only does it falsify the whole, it also diminishes the part... We, too, are a microcosm of that organism and our separation from it becomes a profane act with profane consequences in today’s fragmented, conventional ideology.

The speech was poorly received by the audience. As a result of confusion in the office of the mayor of Konya, the audience consisted mostly of schoolchildren.
PS for Daniel Pipes, who has been exploring the possibility that Prince Charles is a secret convert to Islam periodically since 2003: it is more complicated than that.

Email ThisBlogThis!Share to TwitterShare to FacebookShare to Pinterest
Other posts on: United Kingdom