After the Traditionalist Conference in Moscow

As previously announced, a major Traditionalist conference was arranged in Moscow by Natella Speranskaya, 15-16 October 2011. This featured the leading Russian Traditionalists, Alexander Dugin and Gaydar Jamal. 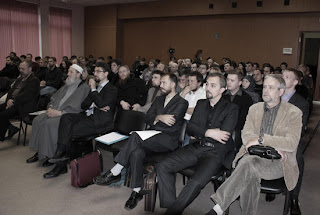 As can be seen in the photograph, among the guests were Abd al Wahid Pallavicini and his son Yahya, of the of the CO.RE.IS (Comunità Religiosa Islamica, Islamic Religious Community). Although Italian "political" Traditionalists such as Claudio Mutti (who was also in Moscow) have been interested in Dugin for some time, interest in Dugin on the part of "spiritual" Traditionalists with their origin in Schuon's Maryamiyya is new. Perhaps a sign that Dugin's influence is now so great that the spiritual and political branches may not always remain as separate as they have been in recent decades?

As well as something new, something old: the verse of Yevgeny Golovin, one of the leading figures in the Soviet-era dissident circle from which Russian Traditionalism emerged. Among the cultural events arranged in connection with the conference was a "rock ballad" using the Golovin's verse, performed by Alexander Sklyar.

Topics discussed are reported to have included eschatology, the postmodern situation, neo-Platonism, chaos, Kabbalah, and "the sacredness of authority and metaphysical horizons of the revolution."

Email ThisBlogThis!Share to TwitterShare to FacebookShare to Pinterest
Other posts on: Italy, Music scene, Russia

I am new to your blog. What brought me here is my search for a work that clearly delineates the difference between the Islamic notion of 'tradition' as opposed to (or in conformity with) the concept of 'Tradition' as put forth by the 'T'raditionalists. Any suggestions? Will be really grateful.

That is one of the things I do in my book Against the Modern World (see link to right on main page of this blog). I think you can see some pages on Amazon, which should let you know whether my book provides what you are looking for. Mark

Mark: very exciting developments. Several questions: 1. Is there any way to contribute from here in the US? 2. Will it be possible to participate in the conference online? 3. Can one get involved by enrolling as postgrad student at MSU for study. 4. Are there affiliate organisations in the States?

John: Questions for the organizers, not me. Try http://about.me/speranskaya