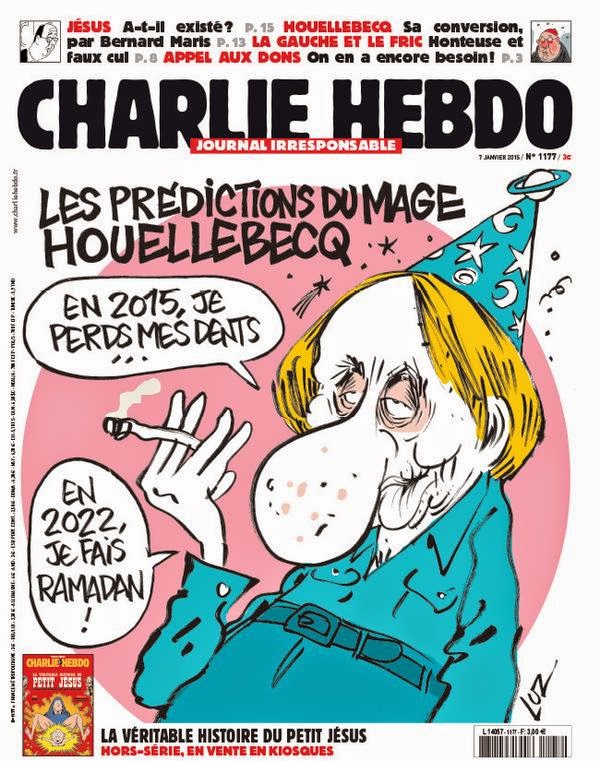 Soumission (Submission), the new novel by the controversial and best-selling French novelist Michel Houellebecq, has been widely identified (especially in the English-language press) as Islamophobic, but might better be described as Traditionalist.

Houellebec and Soumission were featured on the January 7, 2015 cover of Charlie Hebdo (shown here). Houellebecq's novel was selling well even before the Charlie Hebdo cover and attacks, has since become even better known, and is due out soon in English translation.

Perhaps the book's incidental link to Charlie Hebdo helps explain its identification as Islamophobic. The book certainly features the election of an Islamist as president of France and the consequent Islamization of some aspects of French life, a scenario reminiscent of the Eurabia about which writers such as Bat Ye'or have been warning. However, these events are not the book's main subject. National political events are the background against which the book tells its real story.

The book's real story is the decline and redemption of the narrator, François, a literature professor and expert on Joris-Karl Huysmans (1848-1907), author of À rebours (1884).  The novels of Huysmans are partly autobiographical, and the redemption of Huysmans was found in Catholicism. The story of Houellebecq's hero François evidently echoes some aspects of the life of Houellebecq himself, and certainly echoes Huysmans. The difference is that François finds his redemption in Islam. And his path to Islam runs through identitarian Traditionalism.

Two of the book's characters are or have been involved in the mouvement identitaire, the "identitarian movement." Houellebecq does not explain this movement, but it will be familiar to some readers of this blog as that section of the New Right that emphasizes traditional cultural identities (as against globalized multiculturalism), is partly inspired by Traditionalism, has been further developed by thinkers such as Alain de Benoist and Guillaume Faye, and acknowledges Alexander Dugin. Both of Houellebecq's characters with connections to the identitarian movement are presented sympathetically. One, Robert Rediger, is a major character in the book, the Islamist president of the Sorbonne and later a minister in the Islamist government of France.

Houellebecq's Rediger wrote his PhD thesis on Guénon and Nietzsche, and converted to Islam when he concluded that Catholicism had lost the power to regenerate a fallen West, and that the future lay in Islam, as Guénon had shown. These ideas are developed at some length in Soumission, and are the book's philosophical heart. They are simplified Traditionalism: Traditionalism because they acknowledge Guénon and identify modernity as decline and tradition as the solution, and simplified because they make no mention of perennialism or of the esoteric. Houellebecq's Guénon was a convert to Islam, not a Sufi.

In the end, the real topic of Soumission is probably the decline of the West, and specifically of the French Left, not Islam. Houellebecq does not in fact seem particularly interested in Islam, which he seems to understand primarily in terms of polygamy. Houellebecq's Islam does not stop anyone from drinking good wine. His book, however, shows how Guénon's work is assuming new relevance as Europe's political landscape changes.

My thanks to Bertrand for drawing my attention to Bouddhanar's post "Michel Houellebeck lecteur de René Guénon" and thus to the Traditionalist content of Soumission.

I should add that the "Bloc Identitaire", chief representative of the Mouvance Identitaire in France, despite its New Right influences, is actually quite openly islamophobic, an attitude rooted in a mixture of "radical laicity" and catholic conservatism.

Some new reviews of this book have now come out in English, and they seem to suggest that the Guénonian influence on the Rediger character is quite strong, regardless of whether Houellebecq read the Traditionalists directly, or indirectly through the identitarian movement. I refer readers to Guenon's "prophecy".