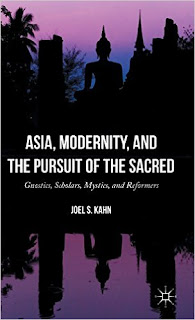 They say that after they retire, scholars sometimes write the books they always wanted to write. Joel S. Kahn, a distinguished anthropologist at the University of Melbourne who worked mostly on Southeast Asia, is now a professor emeritus and seems to have done just that.

The result is Asia, Modernity and the Pursuit of the Sacred: Gnostics, Scholars, Mystics and Reformers (Basingstoke: PalgraveMacmillan, 2015). In this book, Kahn tries to go beyond what he sees as the sterile secular/religious dichotomy by finding resources in Western culture that might allow us to take Asian religion seriously. For this purpose, he looks at what he calls (following Jeffrey Kripal) the "Gnostic current" between the two world wars, the basis of so much that has happened since. And from this current he takes four key writers: René Guénon, Alexandra David-Néel (the feminist, anarchist explorer), Erwin Schrödinger (the Austrian physicist), and Hermann Hesse (the German poet and novelist). The book has eight chapters. Two are introductory, then each writer gets one chapter, and then two conclude.

This looks like an absolutely fascinating book. First, for those interested in Traditionalism, Guénon is put in company that he is not usually found in, but company that immediately makes intuitive sense. Second, for those interested in anthropology, a leading anthropologist is attempting something new, rather radical, and perhaps important. And third, Traditionalist thought is being taken in an unusual but productive way: not as pure truth, and not as purely marginal, but as an important stream of modern thought.

Email ThisBlogThis!Share to TwitterShare to FacebookShare to Pinterest
Other posts on: anthropology, Australia, Guénon, new books

It is an interesting book raising good questions about the dynamic between a purported West and East, different versions of modernist and post-modernist enquiry and on 'Gnostic diplomacy' and the possibility of their being common patterns of experience underlying or transcendent to culture.

The book, however, requires significantly improved editing - can publishers no longer afford them? So poor is it that it undermines your trust in the author's abilities. For example, Hesse was surprised at the reception of his book, "Siddartha" by the counter-culture of the 70s from heaven presumably because he died in 1962! He became a Swiss citizen during the Second World War on p40 but in 1924 on p. 41 (in fact 1923). He got down to writing the Glass Bead Game after WWII to win the Nobel prize in 1946 but the book famously took 12 years to write and was published in 1943! And so it goes, I notice this because I am deeply familiar with Hesse, I can only wonder if Guenon, David-Neel and Schrodinger's lives are dealt with in equally cavalier a fashion!