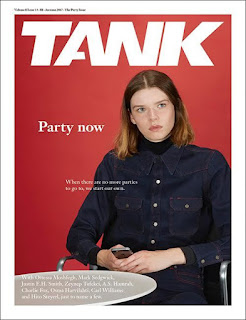 Traditionalism in now trendy. At least, it is the topic of an article in what may be the UK's trendiest magazine, Tank (pictured).


"This autumn, at a time when the world feels at its most divided – its most partisan – we’re throwing our very own Party Issue. While party politics in America are transformed into a school-canteen food fight, here in the UK there has been a resurgence in political party membership. From the history of Notting Hill carnival to the etymological roots of the word “party”; from an LSD library to the rise of Traditionalist philosophy, our contributors include the acclaimed novelist Ottessa Moshfegh, the writers Charlie Fox, Emily Segal and Justin E.H. Smith, and the photographers Osma Harvilahti and Jody Rogac, among many more."

Among the "many more" is Mark Sedgwick, with "The ideology of the new paradigm."

Overall this is a pretty good summary article that condenses a very broad topic with many strands well. A few comments, however. First, in a biography of Prince Charles that was published a few years ago, and in it he was asked about his attitude towards Guenon and Evola. He denied that either was a significant influence or interest of his, and said that his traditionalism came primarily from Kathleen Raine and William Blake. Likewise, while the Temenos Academy has occasionally featured speakers from Guenon's line, such as Martin Lings and Seyyed Hossein Nasr, I think it's quite a stretch to say that it follows a Guenonian line. This is not at all apparent in the work that they do. I was rather bewildered by this line: "The school operates under the active and enthusiastic patronage of Prince Charles, whose engagement with Traditionalism mirrors that of Bannon, but focuses on Guénon rather than Evola." In what way could Temenos and Prince Charles in any way be said to be mirroring Bannon, Breitbart, or any of Bannon's other projects? That left me scratching my head.

Also, as far as Alain de Benoist is concerned, one can make a case that he has been influenced by Evola, but Guenon is more doubtful. In fact in an interview in 2014 he denied Guenon as an influence and said that he didn't regard him as a major thinker.

There are a couple of other things in your article that I picked up on after a second reading. You say, "The extent to which Evola influenced Martin Heidegger is disputed." Is there really a dispute about this? The sole known connection between Heidegger and Evola is a single quotation from Evola's "Revolt Against the Modern World" that Heidegger copied without comment into his journals in the 1930s, unattributed, which was discovered by a German scholar in 2015. Apart from that, there was no known contact between Evola and Heidegger, and Heidegger never referenced him even once anywhere in his published work, and no Heidegger scholar has even mentioned Evola as an influence on Heidegger. So I'm not sure what "debate" you're referring to.

Also, you say that C. G. Jung was Austrian, but he was actually Swiss.

In response to the comments of John Morgan:

I haven’t seen the biography of Prince Charles that Morgan mentions, but even if Prince Charles emphasizes Raine and Blake, an enthusiasm for Traditionalism is still indicated. The connection first runs through Martin Lings, and then expands. It’s not the Temenos Academy that I am describing as Traditionalist, by the way, although there is a definite Traditionalist presence there, but the Prince’s School of Traditional Arts, a different organization. Certainly neither mirror Bannon or Breitbart! The mirroring I see is between Bannon and Prince Charles, in that neither can be described as what I call a “hard” Traditionalist, but both are in some sense “soft” Traditionalists.

On Benoist and Guénon, I agree that Benoist does not now admit to much influence from Guénon or Evola. But if one looks at his writings and intellectual career, I think the influence is there to be seen. I’m actually not sure why Benoist denies it.

For Evola and Heidegger, I recently heard a paper by Thomas Vašek, an Austrian-German philosopher (and editor of Hohe Luft, hoheluft-magazin.de) on “Der Krieger und sein Schatten: Zum Einfluss Julius Evolas auf Martin Heidegger” (The Warrior and his Shadow: On Julius Evola’s Influence on Martin Heidegger), in which Vašek argued for a significant influence. I was not entirely convinced. I think the paper may become an article, and then it will be easier to decide. Hence, for now, “disputed.”

The biography of Prince Charles that I referred to was "Charles: The Heart of a King," published in 2015 by Catherine Meyer. Actually, I misremembered exactly what she said about it - she didn't ask Charles about Guénon and Evola, but rather noted that he made no mention of them in his semi-traditionalist book, "Harmony." She does note his connection with Lings and Nasr, and also that he's contributed to the traditionalist journal "Sacred Web." And actually, you are quoted in the book as well. Page 343: "'Prince Charles is more of an anti-modernist than a traditionalist,' writes academic and historian Dr Mark Sedgwick in his book Against the Modern World, which tracks the skein of Traditionalist influences in the twentieth century. But Sedgwick adds that 'Traditionalism may also lie behind an approach to Islam [by the Prince] that is significantly more sympathetic than is normal in British public life'."

I would basically agree with you that Bannon and Prince Charles are "soft" traditionalists, if we understand that as people who are influenced by traditionalism but who do not treat it as a dogma or strictly follow traditional principles. Although the evidence for a significant traditionalist influence on Charles is much greater than for Bannon, one has to admit.

Benoist has never denied that he was influenced by Evola, I even happen to know that he maintains a library of Evola's works in every edition and language he can get his hands on, but even a cursory glance at Benoist's ideas shows that he could hardly be described as an Evolian: he doesn't advocate for monarchy or for a reintroduction of religious authoritarianism into political life, and he is also a socialist, which is something that Evola saw no good in whatsoever. I could go on but those are some prominent examples. So again, if there is traditionalism in Benoist, it is only "soft" traditionalism. Guénon is not someone he refers to often and as I said he has denied that Guénon is a major thinker.

I wasn't aware of that new study of Heidegger and Evola. In that case you were right to say there is a debate. Although I hope Dr. Vašek came up with more than just that one quotation!

The interview in which Alain de Benoist discusses Guénon and says that he wasn't a major thinker is here: https://www.youtube.com/watch?v=yQYpPJRw23g&app=desktop

Perhaps you will find this interesting:

Very interesting. But Upton´s insight on the syrian conflict is flawled. Also, it is impossible to prove that "the global elites" are supporting Islamic terrorism. Nor the CIA or any governmental entity can really control anything.

Wonderfully informative. I wonder how many are paying attention here in the US.