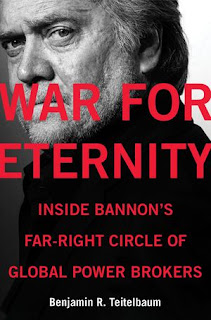 Teitelbaum is an American scholar who has previously published Lions of the North: Sounds of the New Nordic Radical Nationalism (Oxford University Press, 2017), an excellent ethnographic study of radical nationalists and the related music scene in Sweden, and although War for Eternity is written in light, journalistic style, it is based on thorough research, principally long interviews with its main subject, Steve Bannon. 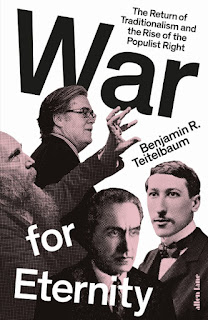 The book’s US cover and title focus on Bannon, but the UK cover and title are closer to the contents, as the book also covers several other Traditionalists, notably Alexander Dugin (Russia) and Olavo de Carvalho (Brazil), and then Gábor Vona of Jobbik (Hungary) and John Morgan of Integral Tradition Publishing and Arktos (online).

Some of what is in War for Eternity will come as no surprise to those who know their Traditionalism and/or have read my Against the Modern World, but much of it is new and interesting. Most of all, Teitelbaum’s long discussions with Bannon reveal Bannon’s own, modified, version of Traditionalism, and resolve a number of mysteries.
Also of interest is what Teitelbaum learned of Traditionalism in Hungary, where it combined nicely with Turanism, the 19th-century nationalist view that joined Hungarians with Turks, Central Asians, Japanese, and Koreans. Just as Eurasianism proved a good basis for Dugin to construct a vision of Russia as part of a traditional alternative to Western modernity, so Turanism helped Vona construct a vision of Hunagary as part of another traditional alternative to Western modernity. Vona opened the King Attila Academy to explore and promote such views, and then closed it in 2015 when it became a political liability.

Somewhat less interesting is the section towards the end of the book on the relationship between Jason Jorjani, an American activist of Iranian origin who is influenced by Traditionalist, and Michael Bagley, a con-artist who ended up in jail.

One criticism: the book perhaps relies too much on interviews, and more attention could usefully have been paid to what Dugin and Carvalho have written.

All in all, however, required reading.

The book just referenced is really just nonsensical. In a comment posted on the article preceding this one, it was pointed out that political reactions and "identitarian" movements in practice lead to nothing. Guenon himself warned of such reactions and that all they do is increase the chaotic landscape of the now post-modern world: both those who embrace dissolution and those who claim to resist it lack an effective, living connection to the truly Transcendent and the counter-initiates know this. This neuters the reaction of the traditionalists completely. (See the chapter "Tradition and Traditionalism" in the book, Reign of Quantity and the Signs of the Times). Bannon and his ilk clearly have nothing Transcendent about them, regardless of their statements.

Another thing, it is abjectly spurious to believe that the "working class", the shudras possess any intellectual aptitudes whatsoever. This rise in "populism" and apparent "disruption" is really just the final nail on the coffin of the world, since the social order has descended from: Ativarna (Satya-Yuga beings beyond all caste and distinction) to Brahmins (Priests) to Kshatriya (Nobility, warriors etc) to Vaishyas (merchants, businessmen etc) and now, finally, to Shudras (the working class, bolsheviks, etc.). In the book, "Spiritual Authority and Temporal Power", Guenon points out that this descent precedes the end of a cycle. The real rectification that will occur before the next Satya Yuga will happen after the counter-initiates finally show themselves and after their global empire is destroyed by the action of the tenth Avatara (Nara-Narayana or Mahdi-Christ, from different points of view). And does anyone seriously believe that Donald Trump is the tenth Avatara??

In short, the cited book is written by yet another author with zero understanding of what Guenon actually wrote and taught. Lastly, this sign of "mass populism" is rather worrying, since if Guenon is to be believed, it is the literal final step, before those who have been pulling the strings show themselves, in a global, count-traditional empire, as the great-wall that separates worlds collapses and before the earth resembles a real, living hell-scape...

So the Deplorables are the Shudra caste. I like it! I wouldn't like to have to explain it to them, though.

@Raoul Fenderson
Well, that would make the progressive liberals, the global elites and the counter-initiates those who are beneath all castes, those who have sunken down to the lowest forms of dissolution, those who have what appears to be an intellect but really is just an apparent inversion of true a transcendent intellect. If the moments before the end of the Kali Yuga are an apparent inversion of the Satya Yuga, then the counter-initiates and all those who embrace their dissolution are an inversion of those who were Ativarna in our Satya Yuga. Guenon is almost prophetic since this exact situation we find ourselves in, he pointed out in the chapter "Tradition and Traditionalism" in the book, Reign of Quantity and the Signs of the Times. It's like everything he wrote in that book is slowly coming true.

That sounds just fine with me. Guenon's writing for the most part goes way over my head, so I'll just take your word for it.

Your clear summation and tantalizing review places this one on my must reads. My knowledge of Bannon is very limited, from vague internet cartoon journalism. From life experience, admittedly anecdotal, I believe there is some truth in Evola's perceptions of the working class. The upper classes, certainly "into the manor born" variety, have some deficits when it comes to understanding the world, as it is, really being in the world. Evola was kind of a badass compared to the more effete, refined, and lyrical Guenon. You could probably have a beer with Evola and chew the esoteric fat. Guenon more knowledgable, talented, and less dangerous. And that's so American, the book cover choice, ha.