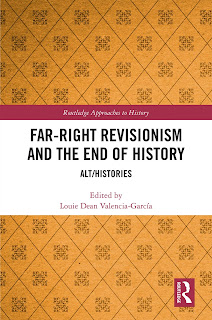 A new collection, Far-Right Revisionism and the End of History: Alt/Histories, edited by Louie Dean Valencia-García (New York: Routledge, 2020) has four chapters of special relevance for those who are interested in Traditionalism.

Chapter 7, “The Extremist Construction of Identity in the Historical Narratives of Alexander Dugin’s Fourth Political Theory” by Charles Robert Sullivan and Amy Fisher-Smith, deals with Dugin and his The Fourth Political Theory (2009), as the title suggests. The chapter argues that The Fourth Political Theory “unfurls three levels of historical narrative.” The first is the Traditionalism of Guénon and Evola, the second is the militancy of Carl Schmitt, and the third is the “other beginning” (andere Anfang) of Heidegger, which is combined with neo-Eurasianism and Orthodox eschatology to produce “a Manichean clash of civilisations, and through the ‘Doppler effect’ of intensifying urgency, a proclamation of the value of war and a program of relegitimated violence.” The chapter is interesting especially for its analysis of Dugin’s use of Schmitt and Heidegger.

Chapter 8, “The Problem of Alt-Right Medievalist White Supremacy, and Its Black Medievalist Answer” by Cord J. Whitaker, deals with the view of the Middle Ages taken by White Supremacists, which is contrasted with the alternative view advanced by writers of the Harlem Renaissance. The view of the Middle Ages of White Supremacists is traced in part to Mussolini and thence to Evola. Whitaker is surely right that “the importance of the Middle Ages in the Alt-Right’s narrative of spiritual knighthood is not lost on the modern movement’s rank and file adherent,” and the myth of medieval chivalry is a powerful one. This perhaps goes close to the heart of the importance of the past for the contemporary right, including perhaps parts of the mainstream right. I fear, however, that Whitaker may be overstating the influence of Evola on Mussolini, who had already romanticized the past for his own purposes before he ever read Evola.

Chapter 15, “Esoteric Fascism Online: 4chan and the Kali Yuga” by Marc Tuters and the Open Intelligence Lab, is one of the most interesting chapters in the book. The Open Intelligence Lab is “an Amsterdam-based collective of interdisciplinary scholars scrutinising online political subcultures” and the chapter uses data produced by a Digital Methods Summer School in Amsterdam, specifically the analysis of 7,000 posts on 4chan/pol/ dating from 2013 to 2019 looking at the use of the key Traditionalist phrase “Kali Yuga.” This produces a diagram of word collocations in which “Evola” occupies a central place as a term that is almost as prominent as “cycle” and “Jews,” the two most prominent terms in the collocation. “Cycle” connects most to “ancient” and “golden,” which is no great surprise, and “Jews” connects to “race,” “Aryan,” and “white,” again no great surprise on 4chan/pol/. What is surprising is the connection between “Kali Yuga” and “Jews” and thus “Aryan,” as for Guénon the Kali Yuga had nothing to do with the Jews.

For Evola, though, there was a connection, and there was an even stronger connection for Miguel Serrano, the Chilean exponent of “esoteric Nazism” who drew on (and on certain points disagreed with) Evola. Tuters is therefore right to point to Nicholas Goodrick-Clarke’s work on what Tuters calls “esoteric fascism” (Goodrick-Clarke used Serrano’s term). He is right to see “chan culture” as “giving a contemporary ‘vernacular’ form” to this, and he is probably mostly right that “for the anonymous Evolites in discussion on /pol/, the Kali Yuga does not signify a decline for all humanity, but rather a failure of ‘The West’ to preserve its own roots and identitarian history.” And, as we know from other studies, “chan culture” spreads into general online culture, and hence general culture.

Tuters’s chapter demonstrates the impact of Evola, via esoteric fascism and chan culture, on the general culture. This is in itself fascinating. It is also fascinating, methodologically, to see how he did this. Perhaps we all need to attend Digital Methods Summer Schools.

Three other gems from this chapter: (1) the general impression of the importance of chan culture for Brenton Tarrant overstates this influence; (2) the posts analyzed by Tuters at one point showed equal enthusiasm for Hitler and Donald Trump; and (3) “taking the red pill” “refers [to] an esoteric experience of awakening.”

Finally, chapter 16, “The Rise and Fall of the Far Right in the Digital Age” by Louie Dean Valencia-García deals with Arktos Media, the publishers who have done so much to distribute the works of Evola. Arktos is, as Valencia-García argues, “one the largest dealers of alt-histories in the world today,” and is also “a nexus between Russian Nationalism, the European New Right and the American Alt-Right.” By “Russian Nationalism” Valencia-García really means Dugin. Arktos is also important for Generation Identity. The chapter deals primarily with the activities and connections of people currently or formerly involved with Arktos, not with Evola as such, though it does look at the extent to which Evola and the other currents promoted by Arktos may be considered “fascist.”

The chapter also deals with this blog, which is described as “a sort of node connecting scholars of traditionalism and traditionalist activists.” This may indeed be one of the many things that this blog does, but it is far from being its primary purpose. In this context, Valencia-García says in a footnote “As presented on the blog, the relationship between Sedgwick [the manager of this blog] and the far-right is ambiguous at best.” Valencia-García was kind enough to explain to me [Sedgwick] in an email that he was not referring to any actual relationship with the far right, about which he knew nothing, but to the way in which I sometimes respond to comments posted on the blog by known far-right activists, which he thought “might be considered by some as a friendly back and forth.” “Rather than describing that dialogue as friendly,” continued Valencia-García, “I thought a more fair descriptor would be ‘ambiguous.’” For the sake of clarification—and to avoid all ambiguity—I should note that my intention in responding to comments is always to be polite, not friendly, and that I hope I am polite to all who post comments on this blog, the vast majority of whom are not connected in any way to the far right.

Finally, the chapter also discusses Jacob Senholt, who was one of the two co-founders of Integral Tradition Publishing, the company that grew into Arktos. Senholt is a Dane who did his BA, MA, and PhD at Aarhus University, where I teach, and I co-supervised his PhD dissertation, as Valencia-García points out. Again, some clarification is in order. When I agreed to be one of Senholt’s supervisors, I did not know of his involvement with Integral Tradition Publishing, but it did not come as a total surprise to me to read of it in Valencia-García’s chapter, as I had heard rumors about what Senholt’s political views (once?) were. In fact, I already had some idea of what his views might be when I agreed to be one of his supervisors, and therefore had to decide whether or not I should agree to supervise him. My view was that as an employee of a public university it was not appropriate for me to discriminate between students, including PhD students, on any basis—not their religious beliefs, gender identify, sexual orientation, and not their political convictions either. I never discussed Senholt’s political convictions with him, only his academic work, and I believe that was the proper course of action to take.

In all, a good book, especially chapter 15.

Thanks for the considered review—it's appreciated. Indeed, I never meant to imply that Mark was a fascist, just that he seemed to be a bit friendly with far-right activists on the blog, hence the descriptor of ‘ambiguous’. Many thanks.

As a journal editor (href="https://journals.equinoxpub.com/index.php/POM"> The Pomegranate, I have been trying to put together an issue on Pagan Traditionalism, following up on 2018's session at the American Academy of Religion. I have begun to think that too many scholars are afraid to examine these issues, because they are afraid of being attacked on social media for being "Nazis" etc. if they even write about them dispassionately. This was not the case thirty years ago, but it sure is now.

Well, I guess that's social media for ya. Didn't exist 30 years ago. Not exactly a boon to "dispassionate" exchange of ideas, is it?