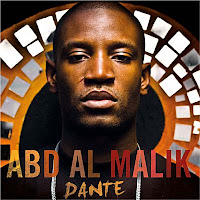 One of France's leading rappers, Abd al Malik, is a Boutchichi, a member of the Moroccan-based Sufi order that is currently one of the world's most important, and draws on Traditionalism.

Abd al Malik, a French rapper, seen here on the cover of his best known album, Dante, is also a poet, novelist, and débatteur. He is celebrated by the French establishment (he is a Chevalier de l'ordre des Arts et des Lettres, a sort of literary knighthood) both because of his artistic achievements and because he is that comparatively rare thing, a French Muslim with street credibility who celebrates the Republic rather than criticizes it.

Abd al Malik credits Sufism for his appreciation of pluralism, a position that is certainly found in the Boutchichiyya, and which owes something to Traditionalism. A recent article on Abd al Malik, Jeanatte S. Jouili, "Rapping the Republic: Utopia, Critique and Muslim Role Models in Secular France" (French Politics, Culture and Society 31, no. 2, 2013, pp.58-80), which discusses the Boutchichiyya but not Traditionalism, records Abd al Maliks's youthful interest in philosophy. Deleuze, Camus and Sartre are mentioned, but not Guénon.

Email ThisBlogThis!Share to TwitterShare to FacebookShare to Pinterest
Other posts on: Boutchichiyya, France, new articles, Sufism