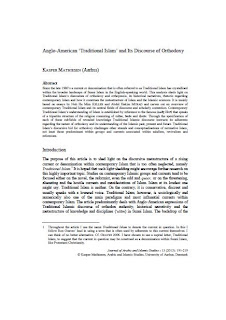 An important new article on Traditional Islam has just been published, and is easily available online. It is Kasper Mathiesen, "Anglo-American ‘Traditional Islam’ and Its Discourse of Orthodoxy," Journal of Arabic and Islamic Studies 13 (2013), pp. 191-219.

In this article, Mathiesen explores and explains the discourses of "Traditional Islam," which he distinguished from Traditionalism, despite its origins in Traditionalism and the ways in which it continues to parallel Traditionalism.

He suggests that Traditional Islam, with capital letters, "may be construed as a denomination within Sunni Islam."  It is, he considers, "one of the main paradigms and most influential currents within contemporary Islam," but is predominantly Western: as a Google search confirms, al-islām al-taqlīdī ("Traditional Islam" in Arabic) barely exists.

Mathiesen traces the origins of Traditional Islam to Seyyed Hussein Nasr’s Traditional Islam in the Modern World (1987) which, he considers, "sets forth a holistic, inspiring and learned grand vision of the Islamic past, of traditional Islam as it was, is, should and could be." Since 1987, he argues, Traditional Islam has developed into something more specific, more Sunni, and less perennialist--replacing, for example, the classic Traditionalist account of decline with one based soundly on Islamic hadith.

Above all, however, there has developed a distinctive discourse, mostly at the hands of Nuh Ha Mim Keller and Abdul Hakim Murad, which the bulk of Mathieson's article explains. The essentials of this mirror the classic trio of  islam, iman and ihsan, and are the importance of the madhhabs in fiqh, an ʿaqīda that stresses complete Divine transcendence against the anthropomorphism of Ibn Taymiyya and his contemporary Wahhabi/Salafi followers, and "the revivification of Islamic Sufism," which for Mathiesen is the "real core issue" in Traditional Islam.

Mathiesen notes in passing that he accepts Ron Geaves' classification of British Barelwis as "Traditional Islam." It would be interesting to see a fuller examination of the relationship between this and the Traditional Islam of Keller and Murad.

In closing, I must declare an interest: Mathiesen is a PhD student in the Islamic Cultures and Societies Research Unit at Aarhus University, where I teach.

Email ThisBlogThis!Share to TwitterShare to FacebookShare to Pinterest
Other posts on: America (North), new articles, traditionalisms (other), United Kingdom

I agree with you that it’s possible to have traditional Islam without Sufism, and what this article refers to as “Traditional Islam” is actually an agenda by modern Sufis, who are correctly attacking Wahhabi/Salafis for their deviation from Sunni Islam, but using the case to attempt to justify their own traditions as a legitimate part of traditional Islam.

Your book was an important source for mine, Black Terror White Soldiers, where I also treat these same issues.

Keller, I agree, is merely a different camp of Traditionalism. He belongs to the same Shadhili tradition, having been initiated by Al Shaghouri, a student of Ahmed al-Alawi, who was a friend of René Guénon (that links him indirectly to Schuon, Seyyed Hosein Nasr and Ian Dallas aka “Abdul Qadir al Murabit”, a friend of Claudio Mutti).

This entire tradition is traceable to Abdul Qadir al Jazairi, who is regularly praised by Keller, despite the fact that he was a Freemason.

K. Paul Johnson in the Masters Revealed has an entire chapter on him. Al Jazairi was also connected with Sir Richard Burton, who belonged to the Theosophical Society, as well as Lady Jane Digby. Both friends of Blavatsky, as well as Wilfred Scawen Blunt, who was Jamal ud Din al Afghani’s handler.

There’s a very interesting story that involves the Shadhili and Burton. According to Edward Rice’s biography of Burton, for two years the inner circle of the Shadhili in Damascus met at al Jazairi’s residence to meditate and pray “for enlightenment before the throne of God.” Finally, as related by Burton’s wife Isabel, they become conscious of a presence among them and used to hear and see things they did not understand. Finally, they received a vision that assured them it was the religion of Christianity which they were seeking. Richard and Isabel threw their support behind the Shadhili, and attempted to secure support for their conversion. But the British government, fearing the political consequences, removed Burton from his post in Damascus.

Al Jazairi, as you mention in Against the Modern World, was responsible for the introduction of Ibn Arabi in Traditionalism. And Keller has repeatedly attempted to justify Sufism as a legitimate science of Islam by referring to Ibn Khaldun, who apparently condoned it, but he fails to mention that Ibn Khaldun heavily chastised much of Sufi tradition as “Biddah” and names Ibn Arabi among the chief innovators. Ibn Khaldun also wrote a Fatwa declaring that Ibn Arabi’s books should be burned.